The Novy SoCal team attended VRLA to support VR developer/publisher, Rank17! The company’s newest title, Mighty Monster Mayhem, was available throughout the show – and attendees got to experience exactly what it would be like to become a monster – climbing buildings, throwing cars, and eating pedestrians! Even Stephen Chiodos of Killer Klowns from Outer Space fame wanted to get in on the act – showing up twice in one day! We also had fun hanging out a bit with Larry Brennan (Microsoft). Novy’s Aaron Goldman worked the booth non-stop – making sure everything ran smoothly; Alvin Arquisola assisted Jeannie Novak and Luis Levy with media appointments; and Marcos Montanez roamed the show floor (wearing monster hands, of course) handing out Rank17 flyers and encouraging people to come over to the booth. Novy client Secret Location also received some buzz at the show with first-person VR bullet hell shooter Blasters of the Universe (also shown in the IndieMEGABOOTH at PAX East)! 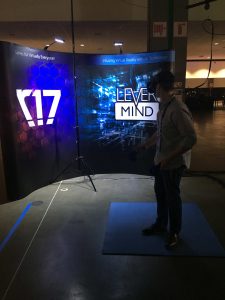 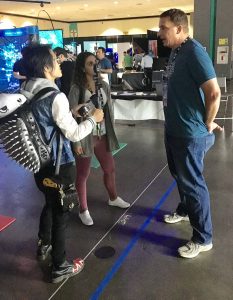 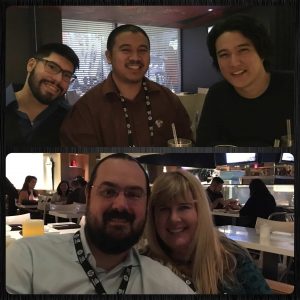 Reflections from the Novy SoCal team:

Aaron (Account Manager):
VRLA was different this year. Having attended it last year, I could see how it had grown to take up nearly 3x the amount of space. Unlike before, I attended this year to help Rank17 and spent almost all of my time meeting happy faces excited to become a monster. Day one was a bit of a learning experience as I familiarized myself with the equipment. Once everything was set up and working, the line started forming. Luckily, I was there to make sure everyone got a personal explanation on how to play the game and get them started. Some people took to it quickly and moved around with great enthusiasm. Day two the line to play grew exponentially. What really surprised me was the diversity of people lining up. Some of my favorite players were the children. Almost inevitably, they would stomp around as they attempted to walk. None of them were shy about swinging at buildings and tearing things apart either. It felt like I was watching childhood dreams become realities. Instead of having to set up a room and risk destroying mom’s furniture, they were able to wreak havoc on a virtual city. They were having a blast and it was great to see them enjoying the game so much. 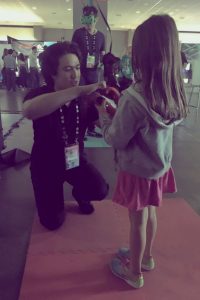 One of my other favorite types of player was surprisingly the older generation. I’m referring to the those past their 70s. I can only imagine the different innovations they have seen throughout their lifetimes and yet they are able to continue to experience new things. Stuff like this was just in imaginations when they were younger.

It was a great experience to see players young and old interested in VR. I’m excited to see VR continue to grow and become more and more affordable for everyone.

Marcos (Playthrough Coordinator):
First things first, VRLA 2017 was amazing and was even better than last year. The biggest change for this year was the convention hall upgrade. One of the biggest draws to VR is the ability to physically move around in this virtual space. With the larger convention hall, vendors were able to take advantage of the extra space and spread themselves out to let the consumer really drive into each experience. Day one was fun and was a day for devs and producers to mingle and discuss the future of VR. However, day two is where things really kicked into high gear, since this is when the doors were open to the general public. I spent the majority of my time passing out flyers for Rank17 which gave me ample time to see everything that VRLA had to offer, and there is was much to see. From the simple first person shooter in its Alpha stage to full on ready-to-ship mech games and everything in between. 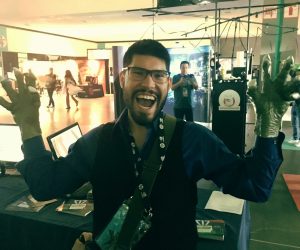 As my second year at VRLA came to a close, I have to say I am very impressed with not just the work VR developers are doing, but also at how fast the average consumer community is growing. People from all walks of life, adults to little children, were all running around trying to experience everything the convention had to offer.

Alvin (PR Coordinator):
Say what you want about virtual reality, but it’s here to stay. There were so many interesting games, applications, and more being shown off at VRLA 2017. We worked with Rank17 and their debut of Mighty Monster Mayhem. There was a HUGE turnout and everyone who stopped by loved the game. I also got to introduce reporters to the CEO of Rank17, Steve Iverson, and make sure the interviews and their experience with the game went smoothly. 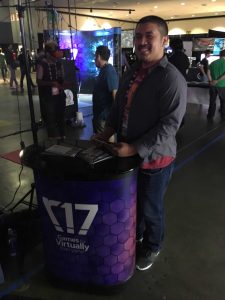 Alvin – always a “man of action” at the Rank17 booth

While there were so many different games people could play at VRLA, it was exciting to see all the hype and long lines for Mighty Monster Mayhem. Overall, VRLA was an amazing experience and I can’t wait to see how VR will grow from here!