Geeks, nerds, and all the other awesome groups of people I associate with don’t have much to look forward to during the summer in Atlanta. The weather is always 100 degrees and 100% humidity–and there are more bugs than I care to admit. Plus, most conventions seem to avoid us–and who can blame them? Sure, we have Dragoncon–but that doesn’t start until Labor Day weekend . . . and summer is basically over by then (or at least as over as it gets in the south). Thankfully, MomoCon has helped save the day for anime, comic, and video game fans across the southeast. We finally have a reason to be excited about the start of summer–and it doesn’t involve flowers, sweltering heat, swimming in bodies of chlorinated and salt water, or any of those other social activities that “normal” people do! 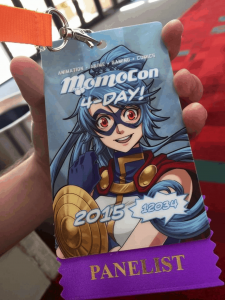 MomoCon started in 2005 as a modest convention founded by a small group of friends at Georgia Tech’s campus. In just a short amount of time, it has grown into a major powerhouse and gained national attention from all fandoms large and small. MomoCon has all the staples you can expect from a major convention: food, games, anime, comics, panels, themed parties, famous guests, and tons of cosplay. For being in a state that hardly has any major geek culture events, the amount of passionate cosplayers in the area always surprises me. The year 2015 marked the first year the convention was hosted at the Georgia World Congress Center–and it had an estimated 20,000 attendees. I’m not sure if that number is accurate–but based off my own experience, it was pretty packed! 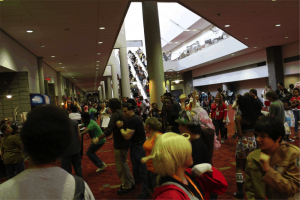 This was also the first year MomoCon had an indie game-focused area, which was very reminiscent of something you would expect to see at a PAX convention. This area had developers from all over the world showcasing their games. Netherlands developer Speelbaars showcased Lumini–a relaxing flow-adventure game in which you control a swarm of smaller creatures (Lumini) to save your planet. 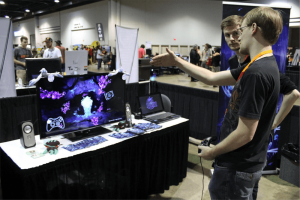 Blane with Niels Koopmans of Speelbaars

I saw several familiar faces from my time as a game journalist and as the vice chair of IGDA Atlanta; however, the most hilarious “reunion” was when I came across Canadian studio Phantom Compass–creators of the pinball RPG game, Rollers of the Realm. Phantom Compass was set up right across from us at GDC 2015 when Novy was at GDC Play representing Daylight Studios for Holy Potatoes?! A Weapon Shop! So at MomoCon when one of the developers from Phantom Compass recognized me, he asked if I was “the potato guy from GDC” because he remembered me attracting a large audience to our booth by shouting “POTATOES!” at people as they walked by. Needless to say, we had a good laugh about this–and I introduced him to some of my friends who were also showcasing their games on the show floor. 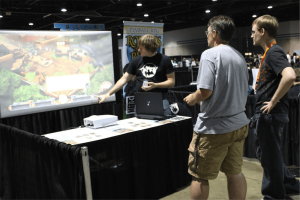 Checking out Rollers of the Realm

There was something about that meeting that really set the rest of the tone for the indie game area at MomoCon. This was one of the strongest convention communities I have ever seen, and I’ve been to my fair share of conventions. At one point, C63 Industries (creators of insanely challenging platformer Pixel: ru²) went around the show floor with a portable microphone and amplifier so that newfound friends could attract a larger audience. It became a common theme to walk by a booth and overhear the developers cross-promoting one of the new games they just discovered on the floor. 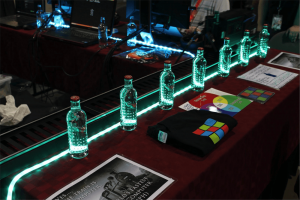 C63 Studios Booth: The computer is a TRAIN!

One of the main reasons I was at MomoCon was to talk about the game development community in Atlanta/Georgia and showcase some of the local game developers as a panelist with the IGDA Atlanta Executive Board. This really let the community shine because not only were we there showcasing some of the awesome games being made in Georgia, but tons of other developers showed up to help support them–even if they were from competing studios. 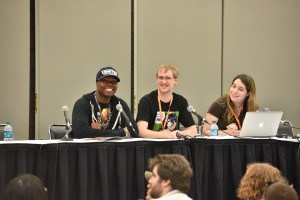 If MomoCon wasn’t enough, about a mile down the street, the International Roguelike Development Conference (IRDC) was having its debut in the United States on the Georgia Tech campus. The IRDC was a significantly smaller convention; in fact, it was more like a gathering of 10-15 people in a classroom talking about game design and the roguelike genre. 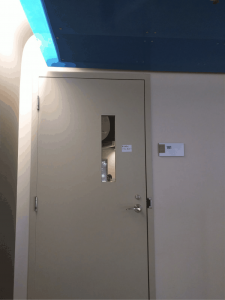 I decided to go check it out since I heard that Freehold Games (one of Novy’s recent clients) was going to be there talking about Sproggiwood. It’s no secret among the Novy staff that I’m a huge fan of Sproggiwood–so when I had the chance to meet them face-to-face, I leaped at the opportunity. 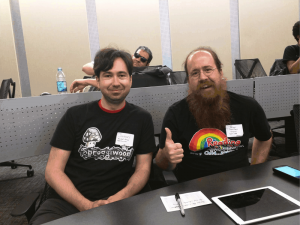 While I was at IRDC, I learned more about the mechanics of roguelike games than I ever thought I was going to need–but it was still pretty interesting stuff. I also learned just how passionate the roguelike community is when it comes to creating a unique experience in the genre.

What did I learn bouncing between two conventions in the same weekend?

I love going to conventions and meeting new people, so it should be no surprise that I thoroughly enjoyed my time at MomoCon and IRDC.