XPO Game Festival 2017: A Blast From Start to Finish

The Novy Unlimited team returned to the XPO Game Festival for its second annual year! We were thrilled to see XPO bigger and better than ever this year with eSports tournaments, a cosplay content, VR games, panels, an indie alley with some of the latest indie titles — and more! This was the 2nd XPO Game Festival for most of the Novy team — this time with Brad Crespo as a fellow team member instead of a guest — and Vanessa, Summer, and Marcos joined us in Tulsa to be a part of the festival. 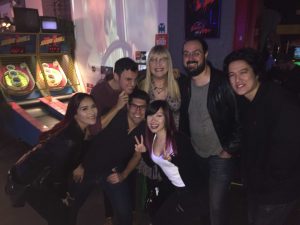 “This year was my first time attending XPO Game Festival and my first time in Oklahoma. The show itself was very different than what I’m used to, it was an intimate environment where developers could show off their games and interact with attendees on a one-on-one basis. This was refreshing to see! I’ve been to conventions where often times attendees are put in a line to play a 15-minute demo, then sent on their way. It was thrilling to see people so excited about the game, and the developer be so excited to talk about it, and share their experiences making it. 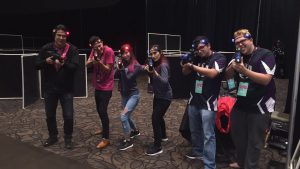 XPO also brought out several notable streamers and industry professionals which was a lot of fun. Streaming has taken a major role in the industry and a lot of younger generation gamers look to streamers and YouTubers to get their gaming information. Having them there and giving people a chance to learn about streaming and how to get started was great! I also had the opportunity to sit in on a live stream with Game Attack as they played Cuphead. I also got to meet more of the Novy team and some of the developers we work with. Getting to know everyone on a more personal level is really rewarding.”

“Oh, where to begin… 🙂 Let me start with the fact that the XPO Game Festival 2017 was a very fun and interesting experience. Seeing that it is still a new convention for the great people of Tulsa, Oklahoma, the crowd was not too extreme like so many other conventions and conferences I’ve been to in the past. At first I’ll admit that I was a bit nervous that the crowd wasn’t going to be big enough, but honestly I believe this worked out in our favor. I worked a wonderful booth for Novastar and showcased a VR game called VirZOOM Arcade. 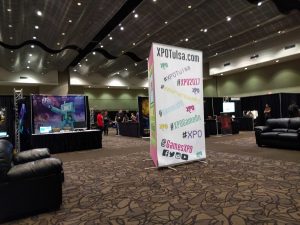 VirZOOM Arcade is a fun set of mini games that use either an HTC Vive or Oculus Rift headset along with a stationary exercise bike as a wireless controller. From the start, the games were a hit at the show and everyone from little kids to adults wanted to jump on the bikes and take off. The mini games ranged from tank battle games to formula 1 racing to the show’s favorite, a Pegasus-flying game. The best part about all of it was getting people not only excited about VR, but getting them excited to exercise. Yes, everyone got a good workout on those bikes, and many of those people wanted to get one for their place. 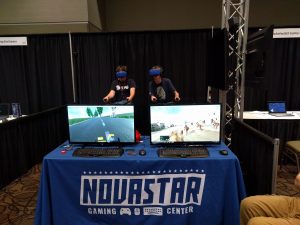 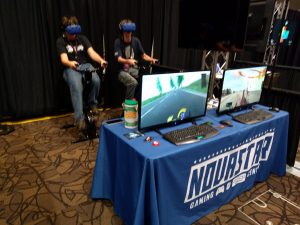 Now I may have been at my booth the majority of my time there, but there were so much more to see and do. Retro arcade games to laser tag, there was something for everyone there. One amazing item I was finally able to try out was the omni-directional track which lets the player actually move in VR. Scratch another thing off my bucket list. 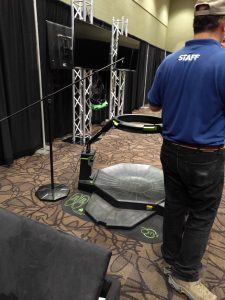 Another little gem of the convention was the musical numbers at the end of the day. Acts such as Metroyd Myk, Heatbox, and Bit Brigade lit up the stage with their own unique musical style. Sadly, I was unable to stay the entire three days of the convention and had to leave in the middle of the third day. Overall, it was a wonderful show and I cannot wait to see what happens next year.”

A wide shot of the XPO Game Festival.

“XPO was something unique this year. While flying is not something new to me, I’d never flown anywhere for a convention. Even though it was a work trip, it was quite fun as I got to experience a city I was unfamiliar with and see the happy faces of people walking a convention floor.

Throughout the convention, I was originally tasked with keeping the main Novastar booth running smoothly and to help with any technical issues to the best of my abilities. Coincidentally, we had quite a few hiccups. Despite having everything up and running the night before, the second day we came in our units would not start up! Steam VR was having some serious issues, and we could not figure out what was going on. Luckily, we eventually managed to reset, restart, and get everything running.

Since we were helping XPO organize, the rest of Novy was out helping people and booths where they could. To mix it all up, we even had to fill a booth for a dev that sadly was not able to be present. For this booth, we set up two of Novastar’s ViRZooms, a bicycle-shaped controller designed to be paired with a VR headset. I wasn’t stationed at this booth, but heard many good things about it! People were constantly pedaling their way to victory in a race or simply exploring the scenery on the back of a Pegasus-like horse.

For the main booth, we were showcasing quite the list of games: BladeShield, Cosmic Trip, Job Simulator, Mighty Monster Mayhem, and Super Pixel Smash.

Despite the little hiccups in getting everything up and running, eventually, we had the ball rolling and people were lining up! As I worked more with VR, I continue to find people of all ages enjoying being in a virtual world. There is a sense of immersion when it feels like you can reach out and touch something. At XPO, the kids tended to flock towards the job simulator game and the Omni platform that was setup. (I found the desire to play a job simulator game rather humorous since they were generally under the age of 15 and had never held jobs.) Adults tended to float between everything to try it all, but the happiest and most animated I saw people tended to be on Mighty Monster Mayhem. Something about being a giant monster leaping about and tearing up and terrorizing a city just brought smiles to people.

It’ll be interesting to see where XPO goes and how it continues to grow next year. I look forward to going back!”

“It was an incredible experience to be a part of the XPO Game Festival this year! For a quick little backstory: At the inaugural XPO (which happened last year), I attended as a volunteer and as an attendee — eager to learn all I could about the video game industry from developers, key influencers, and more. It was there that I had the opportunity to learn about Novy Unlimited. Now, just about a year after the first XPO, I’ve entered into the role of Public Relations Coordinator with Novy. 🙂

Back to this year’s XPO: I absolutely loved it as the festival had something for all gamers to enjoy! There were great indie games to play like Pocketwatch Games’ Tooth and Tail, Overhook Games’ Zenfold, Nyamakop’s Semblance, and so many more. The VR showcase was certainly impressive with NovaStar Gaming Center’s arsenal of VR options, such as an immersive VR Omni VR motion platform, Secret Location’s bullet hell shooter Blasters of the Universe, and Oklahoma City’s own Prismic Studios’ showing their VR titles Gnomelings: Migration and Jam Session VR. Furthermore, the laser tag arena, live concerts, tournaments, retro gaming lounge, full tabletop gaming library, and panels from leaders in the industry were fun to check out as well. Everything at this year’s XPO made it a truly unforgettable event for everyone involved. 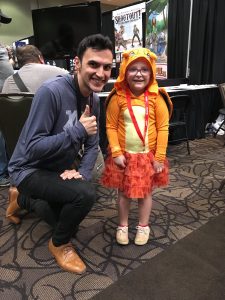 Brad posing with one of the cosplay contests entrants, who entered as Charizard!

My biggest XPO highlight, though, was the quality time I got to spend with the Novy team, developers, and fellow Tulsans. Just having the chance for all of us to come together to share our passion for gaming or just to chat about anything is what made this year’s XPO so special for me. The first two XPOs were simply amazing, so I can’t wait to come back for the third one next year.” 🙂

“From handling XPO’s social media to attending the festival, I’ve had a total blast! I loved helping XPO develop a new social media strategy and watching each platform grow with more followers and engagement. It’s been a surreal experience; promoting the games and developers digitally and then seeing them physically. 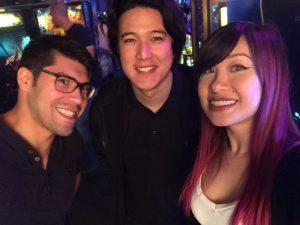 As for the event, it was a ton of fun getting to meet new developers from different states, discovering that a Sailor Moon game even existed, getting a warrior wound from playing laser tag, and failing badly at my first time playing PUBG in the PC area. Although I’m not a developer, I enjoyed listening to the speakers as the content was relatable, and they shared great pieces of advice that could apply to anyone. While XPO has nothing short of activities to do, there is definitely a great small community feel compared to the larger, hectic gaming events. There are big comfy couches, zero waiting lines, and all the areas are close by to each other. All in all, I had a fantastic experience at XPO Game Festival and I would fully recommend anyone to go if they love all things gaming.”

We were ecstatic to see XPO Game Festival this year! We’re looking forward to what adventures await us in 2018. 🙂