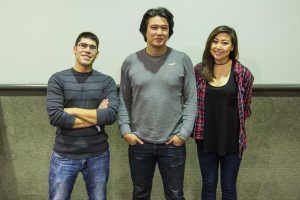 Here are some thoughts from Grace, whose photos are included throughout this post:

“I was thrilled to attend the VRLA Winter Expo in Los Angeles. I had seen and witnessed VR helmets and read about them so much — but until VRLA, I was merely a spectator and fan. I finally had the opportunity to try one on at VRLA, and it was an incredible experience! It’s a really wild sensation; I have to admit that I got dizzy after trying a few demos — and I needed to step away to cure myself of my headache!

“The event occupied a small hall within the Los Angeles Convention Center. I had heard that the event would be small, but Petree Hall seemed like a large meeting room — and BOY was it crowded! Shoulder to shoulder with strangers all mesmerized by the exhibitors who had come to showcase their VR technological advancements, VR gear . . . and of course, VR games. 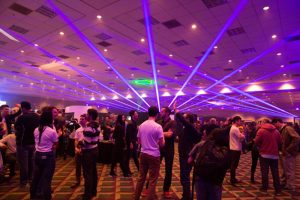 “With big crowds comes long lines. As much as I would have liked to have waited two long hours to sample some of the larger booths, I took my time with smaller booths and got to learn about the product and development process for some of the games that I played. One that caught my attention is a game called Puni, which is essentially a VR tamagotchi. With the helmet on and a controller in each hand you can see, poke, smack, push, and nudge Puni in any direction that the helmet allows. Puni requires care, attention, and of course, love. What blew me away was when Puni would go around you in a circle — and you could follow him with while turning your whole body!

“I left VRLA feeling amazed at how far technology has come since I was a kid. Not only did I get into this thinking VR would be strictly for entertainment purposes, but incredible keynotes and passionate developers convinced me that so much more can be done with VR beyond the scope of games and entertainment. I was moved by the statements from many attendees as well as developers who shared their ideas with bright eyes of what the future has in store for VR and potential ways it can be commercialized into our everyday lives. Needless to say, I’m captivated by how new and exciting VR is — and I look forward to the day that it will be integrated into our lives. I’m excited about the next VRLA and can’t wait to see how the technology will progress!”

Aaron had several thoughts about the equipment, target market, and future of VR:

“Virtual reality has been a dream for many people for years. During the last few decades, VR has slowly emerged into something that is less rough around the edges and far more consumer-friendly. VRLA is the introduction of this equipment into the world. It’s the stepping stone into the world of full immersion we see in cinema.

“After a brief Novy meeting, we split ways and started to handle the floor. Grace and I stuck together to bounce ideas of where to go and what we thought about different applications developers were coming up with for VR units. The convention space was cramped, and people were packed trying to look into each booth. As the day progressed, many of the lines grew to the point of being hours long or by appointment only.

“Some of the gear was quite impressive. My favorite was watching people control virtual equipment. By reaching around your body in certain patterns, the computer would interpret this as a command to be executed.

“The most simple method of VR is the use of a headset. It uses only gyros to control what you see on screen. Add audio to this, and suddenly you’re transported into a new world. Rather than having our necks and heads fixated on a screen, this introduces a new form of controller input. In this setup, we’ve basically managed to strap a screen to our face. 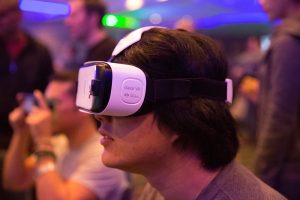 Aaron with a screen strapped to his face 🙂

“Overall, VRLA was quite small. Looking over everything and chatting with developers took only a day. However, being able to experience VR first-hand really shows a consumer how much fun VR can be.

“Thoughts on VR equipment: Until it is affordable for the general masses, developers will only be able to target early adopters who can afford these. They are accessories. PC users will need machines capable of running the software, console users will need the console. Knowing that people already struggle with paying hundreds for the core machine, an accessory that costs just as much would make people consider passing it up.

“However, there are other options. There are many units that utilize our cell phones. This will be a great bridge as the more heavy duty units become affordable over the years. Until then, almost everyone has a smartphone or know someone that does. Without needing most of the expensive hardware since it is included in our palms already, the ‘frame’ of the unit is far more affordable.

“Thoughts on the future of VR: Maybe one day, immersion will no longer be physical but become a 100% mental state. This allows people of all health conditions to participate.”

Marcos summed up the event in three words: “amazing, interesting, and crowded”:

“Let me start off by telling you about the amazing video games I saw at the expo. The first game I saw was called Eclipse from White Elk. Still in its early stages of development, Eclipse was a fun game to walk around in — using a jetpack to fly around and a shoulder scanner to record alien statues. Another fun little game I got to mess around with was called Waddle Home from Archiact Interactive. This Lemmings-style game involves helping one of the most adorable creatures on earth (penguins) get rescued off an iceberg. Using the D-pad on the side of the Samsung Gear, you place objects in front of penguins to alter their directions and navigate them around obstacles in order to get them to the rescue ship. Finally, I got to try out The Climb by Crytek. Much like the rest the games shown at VRLA, it was still in the early stages of development — but what I was able to see in the game was amazing. You are on an island rock climbing up a huge cliff slowly moving from one rock to another trying your hardest not to fall. After a minute or two of trying to get the controls for the game down, I hear the guy helping me at the booth say ‘You’re doing great, but you should stop and look around.’ It was at that moment that I really got the feeling that I was on the side of a cliff looking over the horizon and all I could say was “WOW”; only then, I hear the booth guy remark that he loves hearing people say that it’s beautiful…. 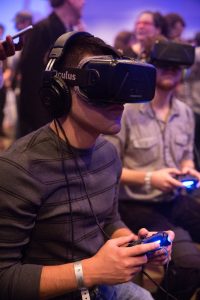 “Now, there were some amazing games to demo at the expo, but there was much more than just games — but very interesting technology that has come about thanks to VR. Leap Motion has created a tracking bar that places your own hands into VR. The demo was simple yet impactful. With this technology, you can actually use your hands to touch and move objects around a virtual space. Pressing buttons and smacking little 3D cubes around was one of the coolest things I was able to do while I was there. Virtually Live takes watching sports to a whole new level. By placing cameras around a sports field at press level, they are able to render a live games and send them to the viewer at only a 6-second lag. (As a reference, watching a live game on your TV has a 4-second lag.) Being able to stand right next to other players as they race down a field is an experience that so many sports fans have dreamed about but never thought they would be able to do. Another big game changer was the Omni track pad from Virtuix. This octogonal-shaped track pad allows you to actually walk and run in a virtual space while holding yourself in place so that you don’t actually run right into a wall with your VR headset on. Sadly, I was not able to try this baby on for size — but I was able to watch other people try it out, and the results were all the same. This is going to be what every gamer will want and drool over for the next few years!

“Finally, the only sad note about VRLA was the crowd. The expo was placed in the Petree Hall of the LA Convention Center which is a very small hall — and then there were more than 60 different companies, one of which had an RV-sized both crammed inside the hall. Add a couple hundred people walking around, and you my friend have a claustrophobic’s darkest nightmare. With all those people, the lines for the demos were hours long — and since it was open for only seven hours, choosing the “right” demos to try out was a must. Overall, I was really surprised at how well it all worked out. Everyone there was nice and courteous — and even after all those hours talking and slowly losing their voices, all the booth guides were excited and eager to talk!”