TwitchCon 2017: A Wild, But Enlightening Experience

It’s been an informative TwitchCon for the Novy crew! An absolutely packed convention center provided challenges to overcome, but the handy new tips for streaming, cyber security, and online success (more on those below) made the trip worth it in the end. Marcos made new friends on the floor, while Aaron learned helpful strategies to thwart hackers (and survived Los Angeles traffic too.)

“With only a one-day pass, there was so much I sadly was unable to see during this years TwitchCon. That being said, I was able to see the Expo floor even if it was just as I passed through to the real gems of the convention: the speakers. This is the real reason I was there, and I couldn’t let myself get distracted by all the games and showcases on the expo floor. 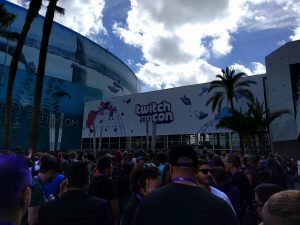 The Packed Entrance to TwitchCon 2017

The goal of the day was to go to five different panels, each one hour long, with a 30-minute space in between. This is where things got a little tricky due to the massive crowds and lack of directional information at the opening of the Long Beach Convention Center. It took me about an hour just to get inside. In one line, only once I got to the end did security stop me and say I was in the wrong line, and I had to go back to the beginning. While in another line, people complained about how they got in and were later pushed back out and sent to the end of a very long line because they were let in too early. 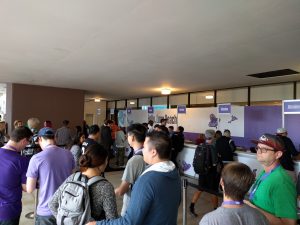 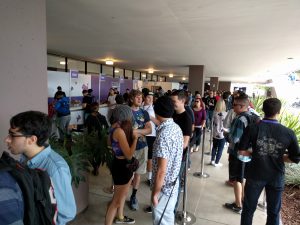 The long lines at TwitchCon.

Sadly, I missed my first panel “How to Grow and Engage Your Community with Twitch.” Thankfully, I was able to get to the other four with little to no issues other than having to stand outside a panel waiting for someone to leave so I could grab a seat. I have to say the panels were great! 😀 Each speaker seemed to really understand the subject at hand and really love what they were doing. The audience was truly engaged in each and every talk, with several questions for the speakers at the end of each panel. I really felt an amazing sense of community throughout the convention, to the point where you could accidentally bump into someone and before you knew it you were in a deep conversation about the industry as a whole or what you were doing to improve yours or someone else’s stream. 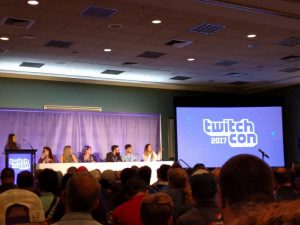 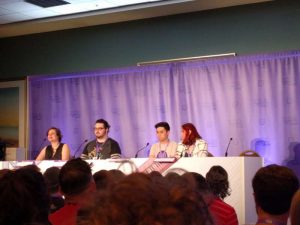 This was a wonderful experience to have gone through and I hope the best for everyone I met during my short time there. I left with new knowledge about how to really improve my streaming experience and gain a larger following.”

“TwitchCon started off rough — but not because of anything to do with TwitchCon. It was the traffic! Los Angeles is notorious for horrid traffic and that day was no better. My 70-mile trek down the freeway was shut down due to a tire blowout. A full-freeway stop was initiated just a few cars ahead of me to remove all debris from the road and get the BMW to the side. We got stuck for quite some time. Luckily, it seemed no one was hurt.

At the convention, it was a busy day for Marcos and I to try and fit in finding + meeting people while being on time to listen to all the speakers. This was a great time for us to learn about streaming and the successes of other people, how they did it, and what we could do to improve. 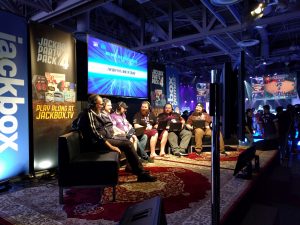 We saw panels and live-streams at TwitchCon!

Of all the panels I attended, “Staying Safe: Security Advice for Streamers” really appealed to me. I really enjoyed the simple take on how to explain being safe online without much effort on the user’s part. We talked about how human beings are very bad at being random, how we rarely pick edges, and how we avoid even numbers. Simply put, we’re predictable. The goal then ends up bring how to prevent hackers. Using alternate emails for identities, what makes a good password, and how to interact with people were just some of the major prevention methods that came up. Just simple actions can raise a person’s level of security to others and negate online harassment tremendously.

Overall, TwitchCon felt short for me since I was only going on Friday. I wish had been able to go around and see more things!”

It was certainly an engaging time for our team on the floor at TwitchCon 2017! As educational as it was entertaining, our crew left wiser and ready to take on the web. Who knows what fun we’ll have next year. 🙂