The Black Widow: Beyond the Grave

Interview infamous 19th century Australian serial killer Louisa Collins through a spirit board in The Black Widow! Created by Richard Fox of Flux, the game gives players an unflinching look into the trial, sentencing, and execution of the last woman to hang in the state of New South Wales.

The Black Widow was first demonstrated at IndieCade 2017 – complete with a custom wooden spirit board controller built by Richard Fox. 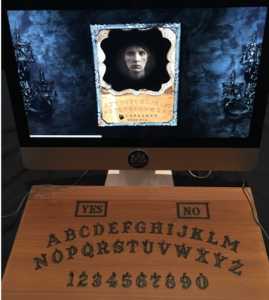 Hearing Louisa’s own words – faithfully reenacted from original court records and letters – players have the opportunity to make their own assessment of Louisa’s purported killings and generate their own lines of inquiry through an onscreen “spirit board” akin to the famed Ouija board that debuted as a parlor game in 1890 (less than one year after Louisa Collins was executed) and has been featured in a plethora of modern horror films.

More than a game, The Black Widow challenges players to reflect on their own prejudices in reconsidering the verdict of a contentious legal case. Was the accused a callous adulteress, drunkard, and liar – or a victim of sexist expectations and misogyny?

The Black Widow is available on Steam, Google Play and the App Store. The game has been featured in a number of outlets – including Kotaku, VentureBeat, PC Gamer, Android Police, AppAdvice, and TouchArcade.

Read more about Flux and The Black Widow here.