The Southern Interactive Entertainment and Games Expo (SIEGE) returned for its ten year anniversary this year and from what Blane and Erich tell us, it was one to remember. Blane and Erich are both executive board members of the International Game Developers Association’s (IGDA) Atlanta chapter and were hosting the second annual Game Studio Smackdown tournament at SIEGE and Blane was invited to give a presentation on the importance of brand leadership for indies.

Blane
SIEGE is probably one of the largest dedicated game development events in the Southeast. It gives the local community a chance to come together and learn from industry leaders all over the country. While it doesn’t get the numbers like GDC, SIEGE has become a cornerstone of Atlanta’s game development community. 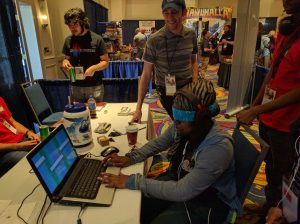 A local developer showing off his audio game for blind people

I was invited to SIEGE to give a talk about the importance of branding for indie developers with fellow friend of Novy, Cat Wendt. Together we were able to share our knowledge about personal, game, and studio branding and the different components that go with each piece. The audience was attentive, took notes, and asked valuable questions throughout the presentation, even after we were done, people kept coming to us for advice. Overall it was a great experience and I was happy to share some of the knowledge I’ve gained over the years to help grow the Atlanta game developer community.

The other reason I attended SIEGE this year was to help host the second annual Game Studio Smackdown. Last year, when the IGDA Atlanta executive board hosted this event, it was hit and we had numerous requests to bring it back. Game Studio Smackdown is IGDA Atlanta’s video game tournament by developers for developers in which the community votes on a team game and a singles game to compete in a two-part tournament. This year the preliminaries kicked off SIEGE on Thursday night and it culminated in the finals which were hosted during the SIEGE lunch. The community chose Rocket League and Mario Kart 8 as the games for the competition and they proved to be intense matches. 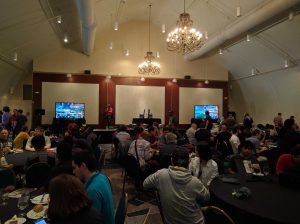 I was in charge of the Rocket League tournament, which proved to be a fair bit of work! Never again will I underestimate the amount of work that goes into planning, organizing, and hosting a video game tournament. I think I might have said something similar last year, but this year cemented that thought process. We had six teams of three register and each game was a serious nail-biter. Putting on the tournament, while stressful, was great because it brought the local community closer together. Hearing the crowd cheer at each Rocket League goal and clap whenever an awesome save was pulled off really made that event worth all the effort. 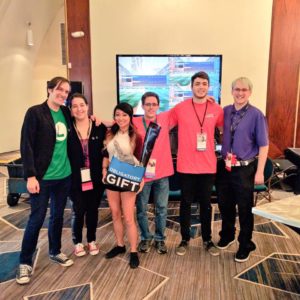 SIEGE is always a great experience for everyone involved. It brings people together, people can be exposed to new ideas, and it lets the Atlanta community showcase what it has been up to over the past year. This was my fourth year attending SIEGE and it will not be my last. If you’re in the Atlanta area next year, I’ll see you at SIEGE!

For those who do not know, SIEGE is short for Southern Interactive Entertainment and Games Expo. I can best describe it as a really small Game Developers Conference in the heart of the South — Atlanta.

Before I moved to Tokyo in late 2014, I was part of the SIEGE organizational committee. It doesn’t seem much has changed during my absence in 2015. SIEGE still remains as cozy as ever as the small, but the beating heart of Atlanta’s game development community. Due to constraints, I refrained from returning to my previous involvement with SIEGE. This time my involvement with SIEGE is as a board member of IGDA Atlanta. Our 2nd annual Game Studio Smackdown was being hosted at the conference! 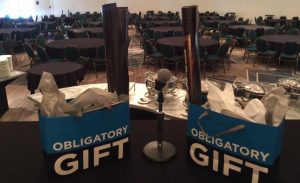 Game Studio Smackdown touts itself as a game tournament by game devs, for game devs. It’s IGDA Atlanta’s event to help unite the game dev community in camaraderie. It was a hit last year, so the board was eager to bring it back for a second time. We posted a poll during the summer which resulted in Mario Kart 8 as our most popular pick, followed by Rocket League! As the resident “Nintendo guy,” I was placed in charge of coordinating and running Mario Kart 8, which I gladly accepted! I reached out to some of my contacts at Nintendo of America and got introduced to the legal team for the first time. It may sound odd, but I actually really enjoyed it! Serving as the liaison between Nintendo and the IGDA, an agreement was formed permitting us to host the Mario Kart 8 tournament! 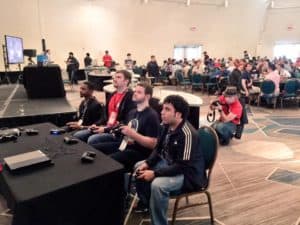 That was the easy part! Planning the tournament structure was the true challenge. Therefore, I recruited the help of my friend, Alex Batres. He not only had good knowledge of Mario Kart 8 but was keenly familiar with video game tournament structure as a competitive video game player. Together, we established a game plan which prepared us well while running the competition!

Thanks to Molly Proffitt (IGDA Atlanta president), SIEGE, and Battle & Brew providing the equipment, setup for the Mario Kart 8 preliminaries was incredibly smooth! I honestly couldn’t be happier. Alex proved to be an invaluable asset, taking ownership of maintaining the brackets while I focused on commentary. I had a lot of fun and I received good feedback about my performance during the event too! 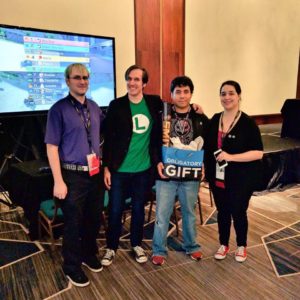 Ultimately, Alex, who was also a competitor, became the Mario Kart 8 champion with 50 points! All that hard work paid off for him! But for me, the best part was seeing other game devs love the game as much as I do!