PlayStation Experience 2015: The Perfect Way to Spend a Rainy Day 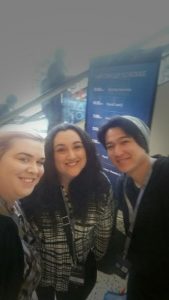 Despite having been to countless game development events, the PlayStation Experience was one of the few consumer-centric conferences I’ve attended recently. I had the pleasure of going with both Brie and Aaron, who ended up being excellent conference buddies.

Day one was pretty packed. The venue was buzzing with excitement, but still managed to feel low-key. Everyone I met — fans and developers alike — were warm, friendly, and wonderful to talk to. I was actually so taken by the demos at the smaller indie booths that I ended up missing some of the AAA announcements (and read about them later on Twitter). Whoopsies!

The show was a lot of fun! My favorite moments were probably talking to one of the developers about the nuances of writing “romance-able” characters and the Sing Star sing-offs. It’s no secret that I’m a big fan of karaoke. (This year, my birthday featured a Rockband 4 party — with actual mic stands.) I ended up sitting out a Sing Star sing-off myself, lamenting my recent cold-induced laryngitis — but the performances themselves were absolutely delightful to watch. I honked/sang happily along to Tribute, Bye Bye Bye, and Barbie Girl. 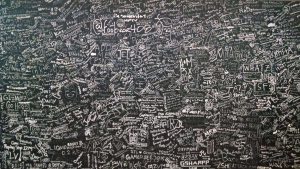 The Gigantic Wall of PlayStation

Before heading out, I made sure to add to this gigantic wall PlayStation had provided. It was huge – the following is just a small section. Can you find my signature?

None of the big announcements coming out of the event really thrilled me. Probably the opposite of that, if we’re talking Final Fantasy VII. It was the first game I ever bought with my own money and played on my own personal computer (as opposed to the shared-with-my-little-brother N64 and Game Boy), so there’s some protective nostalgia happening for me there. I have a hard time imagining enjoying real-time combat and episodic content, but maybe they’ll surprise me. In the meantime, skeptical Cat is skeptical.

Overall, I’m looking forward to playing some of the smaller games that I had a chance to engage with: Jenny LeClue, Hitman GO, and Alone With You were all delightful (among so many others). The event itself had wonderful energy, and I had a great time. I can’t wait to see how the games I liked (and didn’t like) are received by the general public. Here’s to 2016!

In order to reach the Moscone Center and the PlayStation goodies inside, fans needed to first make their way through the beautiful grey and rainy San Francisco weather. California finally getting some rain was almost as exciting to me as getting to spend the first weekend in December at the PlayStation Experience playing new games, connecting with developers, and being among the first to hear all the exciting announcements.

The crowds were thick — and on Saturday in particular, navigating a single row of indie games took several hours. Besides wanting to see absolutely everything and play all the demos, PSX conference-goers had an additional incentive to explore the show floor thoroughly. 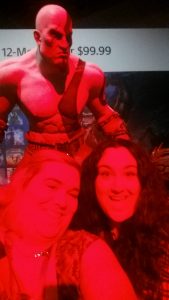 PSX provided us with an integrated app that allowed us to scan our badges at every booth for both physical and digital rewards. If we scanned our badges at 15 booths, the PlayStation Network booth and at a panel, we would receive a $10 PlayStation store credit. Many booths offered exclusive PlayStation skins for check-in, and other booths rewarded you with in game items, or even beta access. For me, having the conference experience gamified was definitely one of the most fun and unexpected perks.

PSX clearly took great care to make the experience as fun and enjoyable as possible. Along with their check-in rewards and an impressive cast of characters that would wander around the conference floor, there was also a variety of professional photo opportunities in several locations. You could pose with giant statues and scenes, and an employee would take a photo and scan your badge so it could then be emailed.

There was a very large Bloodborne fountain that would spit blood and a looming Kronos statue. We posed for a great photo in the Uncharted 4 truck — but as of this post, I have yet to receive it.

The ‘Experience’ part of the PlayStation Experience was definitely well done, but the PlayStation part was what we were really there for. I saw a lot of great games and played a lot of demos that got me super hyped, including and certainly not limited to: 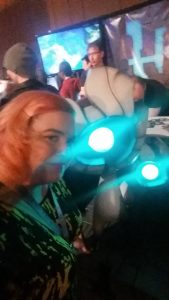 Of course, there were also massive booths with massive lines featuring AAA games where you could take part in events such as Destiny Sparrow Racing or play a new soon-to-be-released map in Star Wars: Battlefront.

However, one of the biggest attractions of the weekend was the sheer amount of VR demos. You either needed to arrive very early for these — or have signed up for them weeks in advance. (I did not manage to do either of those things.)

The entire weekend was fun and exhausting — and we closed it out in the perfect way by collapsing into some beanbags in front of the SingStar competition at the LiveCast stage listening to both some truly talented singers and an amazing butchery of Aqua’s Barbie Girl.

I’m definitely looking forward to next year and whatever delights that will bring.

People who aren’t from California tend to think it’s an hour or so to travel up and down the coast. However, coming from Orange County in Southern California, it’s a 7-1/2 hour drive to get to San Francisco. PlayStation Experience was an opportunity for me to visit this city a second time. This trip was far more wet and gloomy than my previous trip in March for GDC 2015. With no need to book rooms and manage where I was to stay, the trip was much simpler this time — making it much easier to enjoy.

Since I arrived at 3am, there wasn’t much time for sleep. While the drive had drained me, I was still very excited to be there. Luckily, parking was simple and there were almost no lines for entry — despite the giant mass of people inside. Once inside and situated, we had a mini-meeting on our game plan and what we’d like to cover while we waited for the big doors to open. 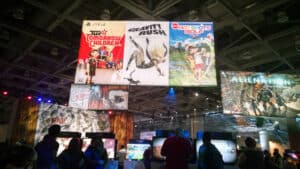 After splitting away from Cat and Brie, I made my way to the rows of indie games located on the sides of the second floor. It was easy to get lost and start ogling over big screens with trailers playing with all the other attendees. Many new games from big companies featured the use of Sony’s new VR unit.

The indie aisles featured many interesting games that sparked everyone’s attention as much as the big titles. Some booths were so packed it was difficult to see what was being played on the TVs. I spent much of my time here going from booth to booth checking in and seeing what each one had to offer. 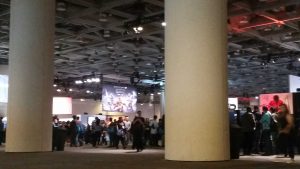 To close out Day 1, I got in line for CCP’s EVE Valkyrie. This was the first time I’d ever experienced a VR unit.

Having always been a fan of CCP’s EVE franchise, I was very excited to see just how much of EVE they incorporate into Valkyrie — and how accurate it was. Waves of eight players were given approximately 10 minutes to engage in a 4v4 dog fight. Unfortunately, our team was down one person — leaving us at a severe disadvantage. Even on the losing side of the fight, the VR unit was an amazing experience. It felt like I was really there — and being blown up was part of the fun. I wanted to reach out and mash the buttons on the ship’s console to survive.

Day 2 started with a scheduled meeting. Afterwards, I was able to experience the rest of the convention as well as revisit some of the booths Cat and Brie and previously visited. We had more time and were able to relax a little. A good portion of my time waiting in lines was spent collecting my thoughts and writing notes. There were so many great titles to look forward to!

Demos that left me excited for the full release:

Overall, PSX was a great experience. Aside from the games themselves, there was also an assortment of rewards that could be tracked via a mobile app. Checking into booths and events rewarded collectible cards as well as an assortment of digital goodies that would be linked to a PSN account.

Thoughts on VR: There is a massive potential behind VR games in the future. While companies such as Sony and Oculus are striving to make affordable VR units, it’s still nearly the price of buying the console/computer to begin with. This essentially doubles the price of your setup. For many people (notably the younger generation), this is outside of their budget range. If they do become easily affordable, VR could very well be the next level of gaming. Compact, high-resolution gaming without the bulk of large panoramic screens are on the way.