PAX East 2018: Bouncing Into the Spotlight

By the time attendees arrive, expo halls are a wonderland of lights, sounds, and technology. It’s all incredible and amazing, but temporary. Order must be formed from chaos, you see, and there’s a special kind of chaos that comes attached to conventions like these. 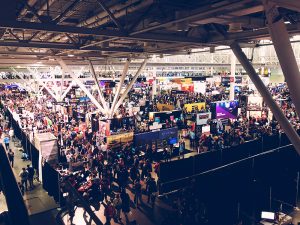 It wasn’t any different with PAX 2018. When we first arrived, it was a giant mess, with crates, plastic wrap, and debris everywhere. We’d attended TwitchCon 2017 last year, so that was familiar. What wasn’t familiar was the amount of brand coverage and the show’s abundance of my two favorite things: board games and video games. Our surroundings may have been disheveled, but we were basically in our own version of a candy shop. 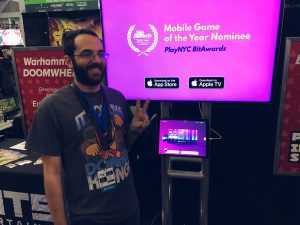 We rode that escalator down into that glorious mess of PAX on setup day, slack-jawed and eyes wide with anticipation. We had no clue where our booth was, when our booth rentals would arrive, or if we’d even be ready in time. All we could think about was our favorite games and getting a glimpse at some pre-release wonders.

Guild Wars 2’s latest expansion, Super Meat Boy Forever, Jenny LeClue, and Fantasy Flight Games’ new tabletop adventure Star Wars: Legion screamed my name as I stumbled off the staircase during its final descent with a spring in my step, as I just set a new global high score on Bouncy Smash on the plane. A player named Eric Lussier had stolen my crown the day before that and I couldn’t go into PAX without being on top, so I fought hard to top him despite the stewardess consistently (and possibly intentionally) bumping my elbow. I think she and Eric may be working together, but more on that later. 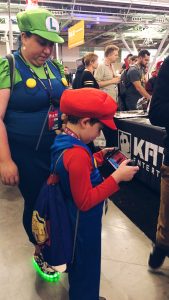 Our setup at PAX was much much smoother than TwitchCon experience, and we were ready to go when the crowds zoomed by us to get to Nintendo, Blizzard, and a host of other amazing booths. Luckily, we didn’t try too hard to get these people to play Bouncy Smash, since they were on a mission and couldn’t be stopped. People slowed down about 5 minutes later, however, and the next few days were a stream of awesome people trying out our game. I can still recall a few faces from the large number of people that played. There was a mom and son Mario and Luigi duo, a cosplayer wearing creepy contact lenses that made their eyes a wicked color, and a kid no older than 4 that performed better than half the adults who stopped by. But none of these stick out in my mind more than the guy that absolutely wrecked my high score. 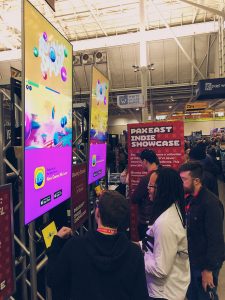 Channeling Icarus, I boasted about my high score while showing him how the game worked on my phone. All of the iPads were taken, so he played a bit on my phone while we chatted. Soon, a spot opened up and he settled in for what would be the longest game of the conference.

Immediately noticing his skill, I told him the PAX high score was 11 million and I thought he could get there. Thinking back now, I wish I hadn’t encouraged him. He was soon soaring past 11 million and well on his way to third place globally. I watched in horror as he passed 20 million – something previously only Eric and myself were able to accomplish.

At 25 million I prayed fervently for a difficult modifier round. The hardest is generally the spike pit, which forces players to take damage when hitting the ground and resetting their combo – an imperative strategy when regaining health back during combos 10 and 30. 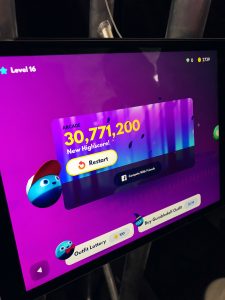 I watched as little Arlo fell toward the map, chanting “spike pit, spike pit, spike pit!” By then, quite a crowd had gathered. They didn’t understand what was happening as a Darth Vader-esque “NOOOOOOOO!!!!” escaped my lips. As Arlo fell, the space for the round modifier announcement remained blank.

I knew he would beat my high score of 26,884,000. It would be almost impossible not to. I walked away in anguish, only to have curiosity drive me right back. 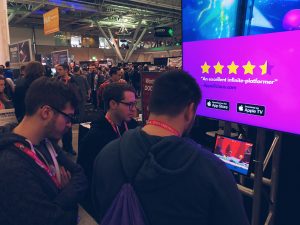 The next round, he got the spike pit I’d been asking God for. He ended with a mind boggling 30,771,200 points. No one else at PAX ever got close to half of that score. PAX was an amazing time comprised of meeting new people, sharing the game we worked so hard on, and seeing awesome things that other developers had worked incredibly hard on. What took the cake for me, however, was the moment my global high score was beaten by a guy on his very first game. It was, quite possibly, one of the coolest things that’s ever happened in our time working on Bouncy Smash. 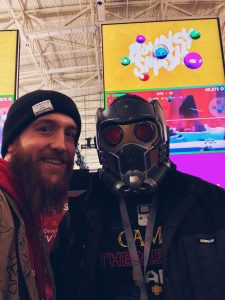 We’re so thankful to PAX for including us in the PAX Indie Showcase. There’s no way we would have been able to attend otherwise, and the opportunity revitalized our passion for expanding upon our game, getting it on other platforms, and enjoying games in general. We can’t wait for next year.

In the meantime, I need to find Eric Lussier again so we can team up and take down the global #1 high score.