The Eastern division of the Penny Arcade Expo, more colloquially known as PAX East, descended once again on a rather suspecting Boston, Massachusetts in all of its nerdy glory. This PAX East actually made event history, as it was the largest to date with roughly 130,000 attendees. That rivals even the largest PAX West (formerly PAX Prime), which typically caters to an average of 130,000 hungry fans yearly.

The deceptive, sunny weather of Thursday and Friday on April 21st and 22nd gave way to clouds and rain come Saturday and Sunday on the 23rd and 24th — but the loving roof of the Boston Convention & Exhibition Center housed literally thousands of consoles, computers, and monitors for gamers to feast their eyes upon. 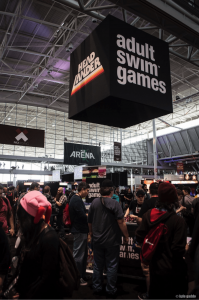 With my tastes changing as I get older, I found myself spending most of my time in the Indie Megabooth this year — since AAA titles, which quickly release anyway, seem to be losing their appeal. However, this is far from a bad thing, since all areas of the Megabooth, including the Indie Minibooth and Indie Rising Stars housed many valuable treasures and secrets. If PAX events have taught me anything, it’s that indies have an opportunity to shine here and don’t have to worry about being overshadowed by the juggernauts of the digital world.

I was lucky enough to play Pyre first, Supergiant Games’ newly announced title to follow up 2014’s Transistor and 2011’s Bastion. A large departure from their action-oriented titles, this story-driven adventure game is based more on player choice and narration than it is in combat. In fact, even its combat sections are largely removed from actual combat, as they are more akin to an ethereal soccer match, where you must score goals on your opponents. Though the game is still in alpha, its visual aesthetic and score seemed to be very polished. Greatly looking forward to more.

Supergiant Games is usually one of the highlights of my PAX stops, as they always have something interesting to show off, but the Indie Megabooth had many golden finds this year. The very valued Battle Chef Brigade was playable on the show floor, cleverly combining action-RPG elements with a cooking puzzle minigame to create a fresh and flavorful combination of game mechanics. Though still in pre-alpha, the game’s anime-esque artwork is stunning and attractive. One to keep an eye out for. 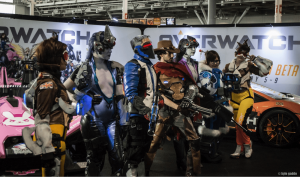 Luck was a lady all weekend, as Battle Chef Brigade’s neighbor was Pump Action Games. Their game Moonshot is a four-player semi-physics-based versus title where you control a flight-enabled tank to face off against three opponents and utterly destroy them. You land on small moons orbiting some sort of large, glowy orb and use the tank’s three modes (normal tank, flying tank, and siege mode tank) to blast your opponents and earn the highest score. A total blast to play—pardon the pun.

The Megabooth also housed many other gems, including the ultra interesting Deliver Us The Moon. Though still a tech demo as of now, this beautiful-looking title has you playing as a lone engineer on a moon base in a mysterious story that unravels as you progress. Carrying on the space theme, we had Orion Trail which, as its name implies, is Oregon Trail in space, but with an ultra comical twist in events. Space dysentery is no fun. To round out the space theme, Halcyon 6 is an excellent space RPG with an interesting take on turn-based ship combat. Certainly one to keep an eye on, as its beautiful graphics will enrapture you completely.

Puzzle games are no stranger to the show, either, and they were here in spades. RYB was a simple-to-see-but-complicated-to-play color/shape-based puzzle game with hundreds of unique puzzles to enjoy. The equally shape-based Circles was also a pleasure, as you had to navigate maze-esque maps with your mouse cursor, with each puzzle as unique as the one that preceded it. The energy-based Desolus was also very cool to gaze upon, as you manipulated matter and antimatter to solve puzzles within the title. Death Squared from Australian developer SMG Games offered up a cooperative puzzle solving experience. One wrong move meant a quick demise for either you or your teammate.

It’s hard to give a rundown of all the wonderful games available at PAX East, but we were lucky to have one of our clients showing on the floor! Blast Brawl 2: Bloody Boogaloo was there in all its decapitating glory. There was never a dull moment at the booth, as someone was always playing the game with either complete strangers or bashing their friends. Glad to see our friends at Mind’s Eye Games really taking off! 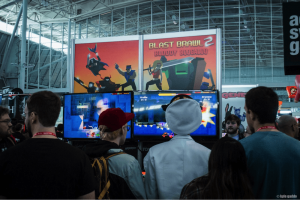 There’s honestly so much at PAX East that a simple blog post just can’t do it justice. It’s something that has to be experienced, and even wanting to experience it all is nearly impossible. It’s a superhuman thing to do or even want to do. Onto the next, however! See you at PAX West!