MomoCon 2017: Going Back to Our Roots

Blane Humphries and Tabi Staalner went to MomoCon 2017 and, as always, they had a blast! This was Blane’s fifth year attending MomoCon and he was able to get back to his roots as a con attendee while also meeting with Twitch streamers where he learned some cool ways to get them excited about your games.  MomoCon 2017 was Tabi’s first convention of this caliber and she took in all the sights and sounds MomoCon had to offer. Each had a wildly different experience at the convention and they’ve included their stories below.

Normally when I attend MomoCon I’m there for something. For the last two years I’ve organized events on behalf of the Atlanta chapter of the International Game Developer’s Association (IGDA) ranging from exclusive press events or talks about the Atlanta’s growing game development community. I found this year to be a bit different than previous years. While I was working at the convention I was not hosting a huge event or planning a talk. Instead, I was able to spend more time getting to know the developers, Twitch personalities, and gaming special guests who were attending the show.

MomoCon this year was different for a few reasons. The expo hall and dealer areas were the largest they’ve ever been, the South East Gamers — my local LAN gaming group — had a table they were using to recruit members, and I was not there on behalf of IGDA Atlanta. This was the closest I’ve been able to attend this convention as a regular attendee, which is great for me as a professional because it keeps me from losing sight of why people attend these events — something that often gets lost on professionals who regularly attend conventions. 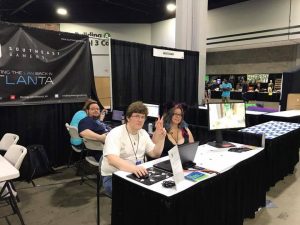 One of IGDA Atlanta’s goals is to raise awareness of the thriving games industry community in Atlanta and show the world that Atlanta is filled with talented and passionate developers. With events like Dreamhack, LANFest, and more coming to Atlanta, the MomoCon gaming space was a visual testament to how much progress we’ve made in bringing attention to the local industry. The space was huge and was filled with exciting games, a full-scale arcade, and an open PC/Console gaming area. Dreamhack even sponsored the LAN gaming area, which drew in a bunch of PC gamers and streamers to the convention.

As a professional in games, conventions provide an opportunity to make new friends and professional contacts within the industry. Seizing this opportunity can open many doors for future projects or can cement a relationship with influencers and media professionals. Developers and aspiring PR professionals take note: DO NOT MISS OUT ON THESE OPPORTUNITIES! They also provide a chance to learn about something completely new that you may not realize you didn’t know. I had such an experience at MomoCon 2017 where I learned just how close-knit the Twitch community really is between streamers. Over the course of a few minutes I went from talking with one streamer about a game to pitching an idea to a group of streamers. Traditionally, the only time you will get to have an experience like this is at a convention or conference — it is well worth your while to seek them out. 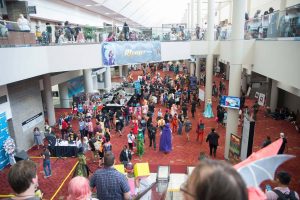 MomoCon is always a blast and I’m looking forward to attending next year!

I’ll be honest. If it were possible to make a living out of being a shut-in otaku I would be all over that. I would probably binge-watch anime and read manga all day while talking to myself with my feeble attempt at self-taught Japanese. When I heard that 3 of my favorite voice actors would not only be at MomoCon, but that they were also hosting a panel together, I knew the road I was going to travel come May 25. In my naïve mind I expected the road to lead me to a magical world purely consisting of anime and cosplay; however, I was pleasantly mistaken. What MomoCon had to offer was so much more than I could have ever imagined just by hearing other people’s experiences or by looking at past years’ videos and pictures. It offered something that one can only experience in person because everyone’s experience will differ drastically depending on the purpose for attending, interests, availability, and ability to decipher where events are being held. All I can offer is my experience. 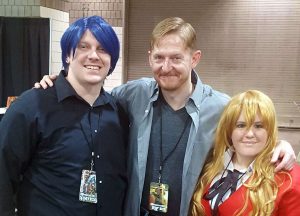 Unfortunately, due to real-world unbreakable commitments, my MomoCon experience did not begin until Friday night. If I could change anything about my experience this year I wish I would have arrived on Thursday to allow myself one more day to experience all MomoCon had to offer. During my time at MomoCon I enjoyed being a spectator to multiple modes of singing events like the Disney Sing Along Contest, a lip-syncing contest, and karaoke until early morning when staff could finally tell the never-ending horde of talented singers to go home. I laughed hysterically at events like the LOL Improv Comedy Show, not only because comedians are funny but simply because of the crowd suggestions and participation from the type of audience you would expect at an anime/gaming convention. I waited ever so patiently in lines to meet the humans that speak the words that come out of the mouths of the sexiest anime characters on Funimation and was mesmerized by their rapport with each other and intrigued by their candidness and advice given during their panels. I felt the heat of competition with an overlay of excitement walking through the gaming hall, which included anything from board games, card games, video games, and unique Japanese arcade games. I was humbled witnessing the result of hard-work, dedication, and passion during the AMV Contest, the Indie Game Awards Show, and walking through the Artist Alley. I learned about raw career experiences by attending panels geared toward educating people on industries involving gaming, voice acting, film/TV, and comics. And at the Rave, I danced… and lost myself in the crowd of cosplaying goofballs. 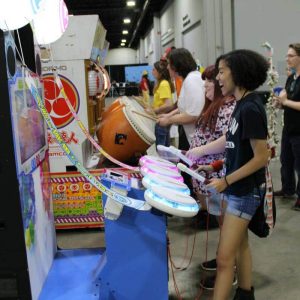 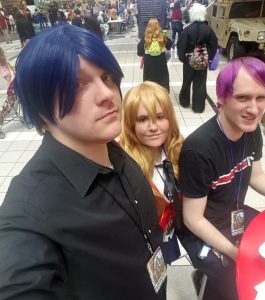 I may have originally found myself on the road to MomoCon simply due to the desire to meet a few of my favorite anime voice actors. However, it was everything that I was able to see, hear, and feel while on the road to my destination that made my experience at MomoCon unforgettable. I am looking forward to discovering the panels, workshops, guests, gaming experience, and entertainment MomoCon will offer in 2018! Until next year!