Rise from lowly imp to menacing final boss in MidBoss, the turn-based dungeon-crawling roguelike – developed by Kitsune Games and available on itch.io and Steam.

With more than 60 unique abilities to learn, there’s no shortage of enemies to kill, bodies to possess, and skills to master in this darkly humorous dungeon escapade.

In MidBoss, you start out as an imp – the weakest monster in the land. Tired of being bullied by the other monsters, you set off on a quest to reach the deepest levels of the dungeon, defeat the final boss, and take its place. You won’t remain a weak little imp for long, though: Possess the body of each enemy you kill, and use their powers to continue on your quest! Gain experience to level up and increase your imp’s base stats to provide major boosts to the bodies you possess. Master the powers of your possessed forms, and equip them to your basic imp body to make it even stronger.

Die, and a custom “Death Card” will document your run: 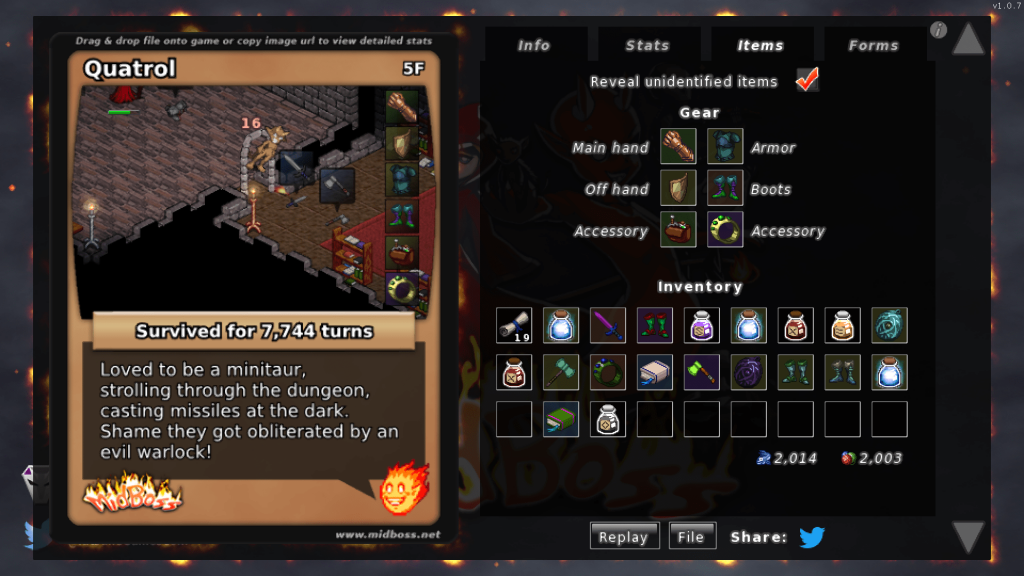 Explore a procedurally-generated death labyrinth filled with monsters, traps, potions, treasures, and more. Loot items and gear to further enhance your stats – but do so at your own risk: Cursed items are a thing – and if you equip them, you’ll have a bad time …

Available on Windows, Mac, and Linux, MidBoss has been featured in a number of outlets – including Big Boss Battle, IndieGames.com, RPGWatch, Siliconera, PCGamer, and SaveOrQuit.