MAGFest 2016: Music and Games…. What More Could You Want?

National Harbor is more or less a really elaborate strip mall. With a ferris wheel and the harbor itself as its standout features, its attractions are far outweighed by its extravagant eateries and navigability. It is, however, important to note that National Harbor is home to the Gaylord Resort & Convention Center—a massive hotel with enough space to room thousands of guests and hold stupendous events. Every year, we are blessed to have MAGFest, the Music and Games Festival, where musicians from around the world will gather and perform for hundreds to thousands of individuals. Beyond that, countless gaming stations, whether competitive or just to play by your lonesome, are set up. MAGFest quickly became a scene for indie developers to showcase their own work, as well. 2016 was no exception! MAGFest 2016 took place from February 18th through the 21st. 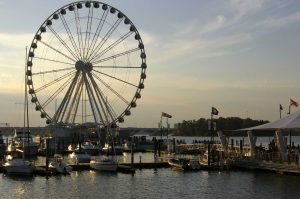 The festivities are now beginning as early as Thursday and last until Sunday. Thursday was at one point the unofficial “first” day of MAGFest, but has now garnered enough attention to become an official day. It’s amazing what a collective conscious can achieve. The fest doesn’t really kick into high gear until Friday when the concerts start taking place.

Though MAGFest is known for its video games, the true draw of MAGFest is in the music, as mentioned before. This year, we would be treated to the unbelievable music of Inti Creates, the team responsible for years upon years of music from the iconic Mega Man series, and most recently the to-be-released Mighty No. 9. This year would also be extremely special, as a passion project by composer Austin Wintory would be realized on one of MAGFest’s stages. thatgamecompany’s Journey would be played before a live audience with a chamber orchestra performing the music as the players progressed from the beginning of the game to its end. This Kickstarter-funded dream would premiere here and then go on to perform in other major cities across the US.

As mentioned, MAGFest heavily highlights its musical aspect. Returning to the stage after many years was Metroid Metal, a musical endeavor pioneered by Grant “Stemage” Henry. As its name implies, it offers a metal edge to the exemplary music composed by Kenji Yamamoto for the Metroid games over the years—especially Super Metroid. 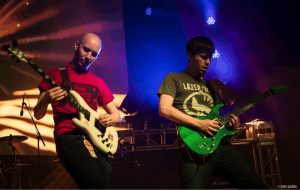 Thursday night meant we were also treated to the nerdcore rap stylings of the very famous Mega Ran. Known for his Mega Man-based raps, he also popularized raps based around Final Fantasy VII and other popular game series. Joined on stage with his fellow nerdcore rap artist Professor Shyguy, the two weaved their words and melodies together to create a truly special show for the first official night of MAGFest.

Friday, however, would be a an equally special day. As with many conventions, the middle day is the one to be at, and MAGFest’s Friday is no exception. To kick things off as far as performances were concerned, if Mega Ran is the king of nerdcore rap styling, then Sammus is his equal as the queen. Her emotionally-charged lyrical content based around the imaginative nature of nerd culture allowed her feelings to connect with the audience in ways that very few people can. Truly a special performer and a diamond in a world of coal.

Friday night would also feature Inti Creates performing the entire Mighty No. 9 soundtrack in a world premiere event for not just MAGFest attendees, but people watching on Twitch as well! The Inti Creates team would have another performance on Saturday night where they performed select pieces from their extensive catalog of music, including famous tunes from the Mega Man Zero series.

However, the night would close out with the hilarious and wild from Tupper Ware Remix Party and Ninja Sex Party! Danny Sexbang and Ninja Brian, with their comical stage antics, would rock a full MAGFest house without so much as batting an eye.

Saturday would be home to perhaps the most beautiful performance of the weekend, however, as Austin Wintory and his chamber orchestra would take the stage with four successive players to play thatgamecompany’s Journey from beginning to end, the chamber orchestra producing the score the whole way, all while Wintory conducted the entire performance. It’s difficult to put into words just how beautiful this world premiere was, as Journey is such a nuanced title, both in score and in play. Everything about the game coalesces into something magical that transcends its primary functions as a piece of entertainment. This first performance of Journey LIVE was well beyond words, full of tears and laughter, and even the slightest gasps as many people felt their hearts skip beats. 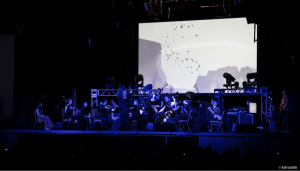 Beyond that, we were also treated to a small stage performance from chiptune artist Danimal Cannon, on the cusp of releasing his brand new album Lunaria. More performances were had, as the comical Psychostick took the main stage to sing about beer and beards, while Mega Ran reprised his role on stage with an ensemble cast of nerdcore rap stars to join his party. The band performances closed out with pop-punk geeks I Fight Dragons playing their own brand of fun-filled music.

Did the musical fun stop there? Nope! Why stop when we can keep going? After all the bands had finished, the main stage was graced with the presence of prolific chiptune artists from around the world, including one of my favorites in Kubbi. The 3-hour “chiptune rave” was certainly a delight as the chiptune artists played fan favorites and remixed them live before our very ears.

Let’s not go this whole time without talking about another important aspect of MAGFest, though! The games, games, games! Packed away in a not-so-little section of the Gaylord Resort is a huge area dedicated to buying and selling games and game-related knick knacks, as well as simply having games to play, both old and brand new (even some that weren’t even finished)! The dealers’ room was always packed at all hours of the day with people looking for a good price on a rare find to add to their collection, but there was always activity in the gaming area, as tournaments were held around the clock and players just couldn’t get their fill of their favorite title, even away from home. From the NES to the Xbox One and PlayStation 4, MAGFest has it all. In fact, here’s a shot of several of my friends enjoying a rousing round of Rock Band 4, singing The Rolling Stones’ “Gimme Shelter.” 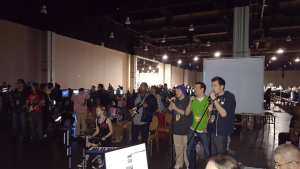 Let’s not forget the indie developers, though! When I say “brand new” games, I certainly mean brand new, as many of these titles exist in an unfinished state. Titles like Pixel Noir, Nothing Good Can Come of This, Gala Collider, Treasure Adventure World, Lost Cave, Rhythm Core Alpha II, Prisma, Just Shapes & Beats, and more were available for everyone to get their hands on and interact directly with the people who were making them. The beauty of events like MAGFest correlates with just how much you can connect with the people who care about the same things that you do. Hungry developers looking for feedback will offer up their unfinished titles to create a much-needed rapport with their potential future players. 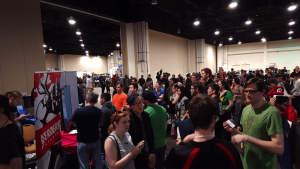 Just Shapes & Beats from Berzerk Studios was certainly one of the most popular attractions of the indie developers’ area, as it always had a massive crowd whenever the setup was live. The rhythm-based action game has you dodging obstacles produced to mesmerizing beats, mostly notably from our aforementioned friend Danimal Cannon. The final game boasts more than 60 songs, however, and will definitely garner a great deal of attention in the near future.

From games to music, MAGFest certainly has it all and we here at Novy are looking forward to next year’s event, taking place in January of 2017!