Another year, another exciting time at IndieCade for the Novy crew. This year, IndieCade brought surprises coming again and again. From communicating with ex-cons from beyond the grave, to devouring the best curry Los Angeles has to offer, IndieCade brings people together. The team made the convention an unforgettable experience, and brought life to every moment (pretty hard to do when you’re playing a game with a ghost!) Some of us spoke with journalists and families, others got sick, but all of us had an indie-filled heck of a time!

IndieCade was truly special this year! We were fortunate to work with FLUX to help promote The Black Widow, an interactive murder-mystery game, and our newest team member, Nile Koegel joined us at the event for the first time to help. 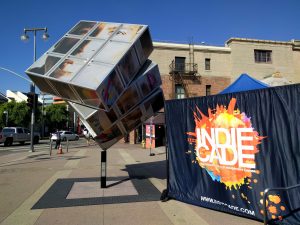 The outside of IndieCade.

“To begin, in my eyes IndieCade was a wonderful success. While I was not able to go around and see any of the other sections of the convention for any good length of time, the projects I was able to see were amazingly different and unique — a perfect blend for indie-style games.

As for me, I was working The Black Widow’s booth for the majority of the time at IndieCade. Creator Richard Fox really brought his A game to the convention with a very chilling and immersive interactive murder mystery. Then, to top it off, he brought a working Ouija keyboard which used electrically conductive paint for letters. It was a hit at the show and drew a constant crowd to the booth. The game’s writing along with the voice actress, Amber Cunliffe, helped bring the game to life, and kept the people asking, “when is this game coming out again?”’ 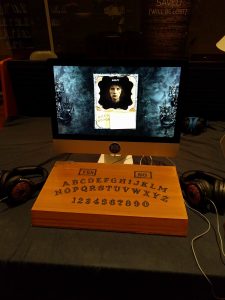 “IndieCade was set at a museum this year. The first event I have attended that used a venue that was not originally intended for mass amounts of vendors to be set up in. Even so, everything seemed to be set up very well! Since developers were split into smaller groups, the noise level was kept down to a far more manageable level.

This year I had attended to assist Flux with The Black Widow, and we had a setup like no other. There was a Ouija-like board that was dubbed the “Spirit Board.” This board consisted of a handcrafted wooden frame with conductive paint for the letters. It allowed people to interact physically with the game and was drawing in crowds of people. Having a method of physical interaction is very appealing. Combine a unique method of playing a game with an eerie game and you have a recipe for success! People were lining up to give it a go.

I spent most of my weekend asking passersby if they wanted to speak with ghosts. After a confused glance, just about everyone I asked followed me to our booth for The Black Widow, a narrative-focused game in which players commune with the spirit of a convicted real-life murderer. Players either worked alone or with another player to learn more about the Black Widow’s case and reach their own conclusions. In between helping people learn the game, I met developers and enthusiastic gamers from all walks of life, as well as my fellow Novy staff. We discussed our gaming backgrounds and shared stories about our pasts (not to mention good eating spots in downtown Los Angeles).

When you consider how video games connect people with the spirits of their creators, inviting people to talk to ghosts is not so strange. But seeing The Black Widow become a nexus for cooperation made IndieCade all the more mystifying. Ordinary people in plain clothes revealed themselves to be journalists and developers with sprawling industry histories. Parents, children, and storytellers convened to solve a centuries-old murder story. Some players were drawn to the game alone by its “spirit board,” a custom-made hybrid of touch keyboard and wood paneling that The Black Widow’s developer, Richard Fox, had created himself for IndieCade. We had all gathered to explore games – as players, developers, or marketers – and played a role in their evolution, like the old arcades from which IndieCade draws its name.

My time at IndieCade was humbling but exalting. I had introduced countless people to one developer’s unique ambition, a small drop in a far larger web of the gaming industry that nonetheless shone brightly as its own creation. I was only one part of that cycle, yet I had played a role nonetheless. And I had done so with comrades who were just as excited about video games as I was. For the first time in years, games felt truly magical once again. 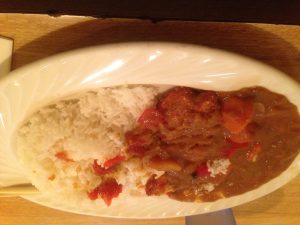 Nile’s delicious curry from the Suehiro Cafe in Little Tokyo.

Oh, yes, the food. Nothing tops off of a long day of talking to people like piping-hot curry in Little Tokyo.”

Like any good arcade machine, IndieCade makes you want to come back for fun over and over again. We all enjoyed our time at IndieCade and working with FLUX, and are looking forward to next year for another round of the creepy, the intriguing, and the indie!