During the course of helping Poland’s Bloober Team plan a media trip to San Francisco a few weeks ago, we began to realize that a stop in Atlanta would be beneficial to them due to the many press contacts Blane has in his home city. We made the suggestion to Bloober, and they adjusted their schedule. Here’s what happened when Blane took the reins and showed them around “the city he calls home” ☺

Anyone who has ever been to Georgia knows there are some unique characteristics about the state, its people, and its geography that set it apart from the other states in the US. Some of the immediate features that stand out to visitors: There are at least three churches on every corner, everyone loves sweet tea, the only soft drink you’ll ever see is a Coke … and you can’t miss that unique Southern drawl! 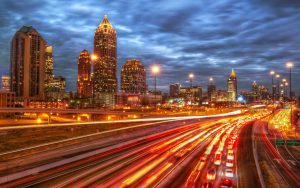 Bloober Team took it all in stride with a smile on their faces—and like any true Southerners, they ordered an American beer and got to work.

Our first order of business was an interview with Richard Bailey, Jr. of The Koalition. The interview went well—and after we were done with “official business,” the Bloober Team guys were interested in learning about the area. They said they never knew such a big city like Atlanta existed in the southern part of the US because no one in Poland really talks about it.

After dinner, Bloober Team realized they needed socks and were super excited to be able to buy socks in the US. I couldn’t help but laugh at their excitement, but I learned it was because clothes are much more expensive in Poland. 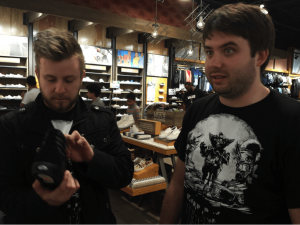 Bloober Team’s Andrzej Janicki and Michal Mielcarek hit the mall –
with Andrzej contemplating a shoe as Michal plans the shopping spree of a lifetime!

The next day was filled with excitement. To kick things off, we had another press interview/live stream with Charlie Hawkins of Altered Confusion. This went really well, since we were able to live stream an interview with the developers about BRAWL and take audience questions during the interview. This was followed up by a live stream play session of BRAWL, where we were able to showcase the different modes and characters found in the game. 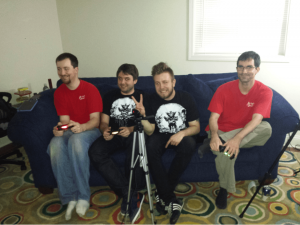 Naturally, the only way to follow up a two-hour long press session is to go shopping. Through this experience, I was able to learn that one of the guys loves Star Wars. He just had to stop and take a look at everything that had a Star Wars logo on it.

I was also able to learn a bit about these guys and their culture: 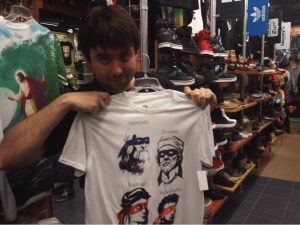 Now, that’s a Teenage Mutant Ninja Turtles reboot Michal can get behind! 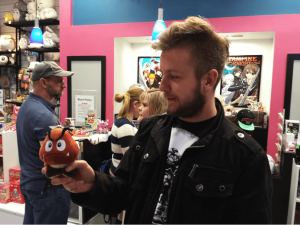 After spending a few hours in the mall, we decided it was time for dinner. While they were here, they told me they wanted to try as many classic American foods as possible—so what better way to end the night than with a massive all-American burger?!

There’s a place in Atlanta called The Vortex. It’s an alternative culture-themed restaurant famous for serving unique burgers. They have burger there called the Quadruple Coronary Bypass that has two grilled cheese sandwiches for buns. I’m mentioning this because I learned that Polish people don’t know what a grilled cheese sandwich is, which led to a rather hilarious conversation of me having to describe one to them. 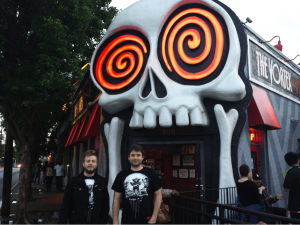 Andrzej and Michal emerge from The Vortex.

On the last day of their visit, we had rented out Atlanta’s premiere video game bar, Battle & Brew, for a massive BRAWL reception. Battle & Brew’s management was honored to have us there demoing the game, so they got on board—creating an official event on their Facebook page and starting their own marketing campaign. We had no idea what to expect—or if anyone would show up, since it was on a Monday. We could not have asked for a better turnout.

During out time at Battle & Brew, we had hundreds of people come play BRAWL with Bloober Team. Everyone seemed very excited to play the game, and people were soon calling their friends to come out and join in on the fun. At one point, we had so many people coming in and playing BRAWL that Battle & Brew offered to give us the venue for the rest of the night. Overall, Bloober Team was very pleased by the community reaction and even had new fans asking for autographs. 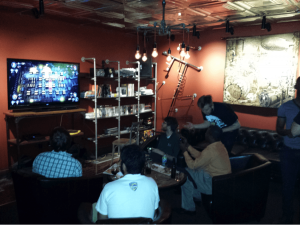 Getting the party started: The calm before the crowd at Battle & Brew.

One of the best things about being a Novy team member is working with so many talented people from all over the globe. It was such a pleasure working with Bloober Team, and I hope this is something I can do again for another Novy client one day!