Venture across the dangerous Sub-Saharan desert to bring water to your village in Ayo: A Rain Tale – now Greenlit on Steam! 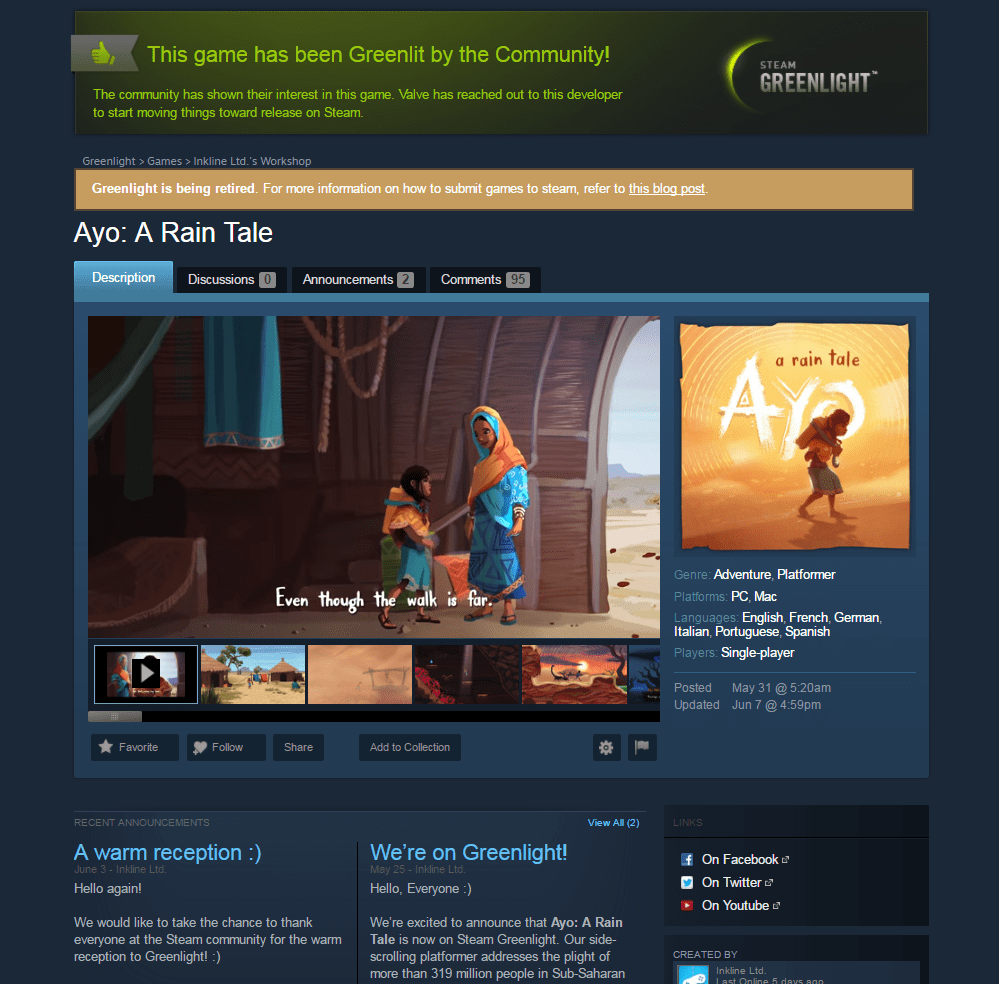 Embark on a journey for clean water in this lyrical side-scrolling platformer – developed by Lebanese studio, Inkline – that addresses the plight of more than 319 million people in Sub-Saharan communities.

Ayo: A Rain Tale explores the psychological impact of trekking across the desert, revealing the struggles of millions of young African children. Players take on the role of Ayo, a young girl who is about to leave home for the first time to gather water for her family. To succeed, Ayo must face the harsh conditions of the Sahelian droughts and overcome her fears without falling victim to her own mind …

After encountering a sudden sandstorm, Ayo loses her path and becomes lost in the desert. Fortunately, she meets the Asili Twins, who join Ayo on her search for water and provide help along the way. However, as Ayo continues to travel, the world around her begins to look mysterious and magical – as if she’s been transported to a new land.

The desert is a dangerous place, and you’ll need to help Ayo overcome many hardships. Crawl, climb, and jump your way through the Sub-Saharan lands as you solve puzzles, avoid dangerous hazards, and discover hidden paths during the scorching days and chaotic nights. Escape from crashing boulders, time your jumps perfectly with moving platforms, and challenge ruthless enemies – all culminating in a climactic encounter with Ja Thunderstorm, a large bull who wants to keep all the water for himself!

If you survive, the trek back home is grounded in reality – a harsh reminder of the world we live in.

Available on Steam (Windows and Mac) in Q3 2017, Ayo: A Rain Tale has been featured in a number of outlets – including Hardcore Gamer, Operation Rainfall, GamersHell, Indie Game News, COGconnected, and One Angry Gamer.

Read more about Ayo: A Rain Tale and Inkline here.