ARK Park: Do The Locomotion!

ARK Park updated with free locomotion on all platforms – and it’s now available for a 30 percent discount for the SteamVR Spring Sale through Monday, April 23!

Free Locomotion at Last
In even better news, the developers have been hard at work on movement systems – and the game has now been updated with free locomotion! Expect the patch to drop very soon.

Also, the team has addressed concerns from PSVR owners – the PSVR version’s graphics will be greatly improved thanks to a patch that should hit around mid-May. 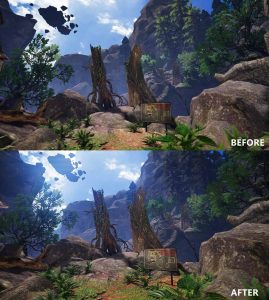 Snail Games has also added a tutorial that explains the free movement option – which is presented to players upon starting a new game.

Bug Fixes
All of the following issues have been fixed/adjusted:

About ARK Park
Based on Studio Wildcard’s best-selling ARK: Survival Evolved, ARK Park allows VR users – and their friends – to interact with more than 100 dinosaurs rendered in stunning detail across 6 massive environments. In ARK Park, your headset of choice allows you to experience a series of mind-blowing VR-driven theme-park attractions built on top of a variety of biomes – each with distinct weather patterns, vegetation, and terrain. Designed from the ground up as a realistic dinosaur theme park simulation, the game allows you to freely traverse the grounds without any restrictions whatsoever. There’s no set plot or schedule to follow: Choose how and where to go next at all times – surveying the prehistoric park at your own pace. You can even join your friends in multiplayer “park tours” to share the thrill of getting up close and personal with living, breathing dinosaurs!