GDC 2017: Exploring the Show Floor & Hanging Out with Clients

The Novy team was super excited this year to have the annual team meet up at GDC 2017. There was much more freedom this year and the team was able to go out and explore more of the show floor and chat with some amazing developers who are working on interesting and unique projects. When we returned from the conference everyone had a story to share and some were too good not to share! 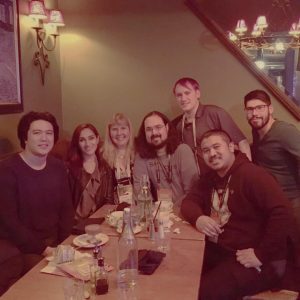 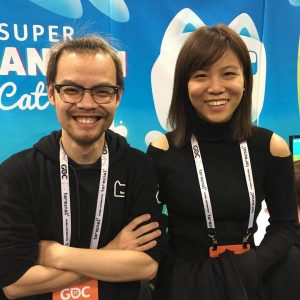 Veewo Games’ Jason Yeung and Jun Xu celebrated with the Novy SoCal team after the show over a nice dinner in Marina del Rey!

Here are more highlights from the Novy team! . . .

Alvin (PR Coordinator)
In my three-year public relations career, I knew that making the switch to video game PR was the right choice once I entered GDC 2017. It was a real sight to see the passion and excitement put into each game by their developers. Watching our client Brett Taylor from My Dog Zorro talk about his game Linelight with such fire and belief was so refreshing to hear. It really helped solidify my own career decisions of being in video game PR. Once networking opportunities came, I didn’t freeze or talk too much like I noticed a few people did. I even got to meet one of my favorite indie game devs and just talk about the thought process and dedication she put into her game. Game devs aren’t immortals. They’re just normal people who want to tell grand stories through the medium of gaming and I am happy to be a part of it.

Aaron (Account Manager)
2017 is my third GDC. All have been wonderful experiences with the Novy team. This year, Alvin and Marcos kept me company as I drove up from near LA. We had a great time discussing various topics that we shared an interest in. GDC was just as packed as ever. As I continue to come back year after year, I start to recognize familiar faces to vendors that have been around before. GDC Play had a tremendous more amount of virtual reality titles this year as well. VR seems to be growing in popularity. There was a horror, maze game that particularly caught the attention of our trio. Overall, I really enjoyed the strategy games the most. Although I was unable to see much of the main floor, I have a list of anticipated titles and am looking forward to their release! I had a great time this year!

Brad
This was my first GDC and my first time in California. It was truly an unforgettable and fun experience. Before GDC, the only Novy team member I’ve met was Blane (we met at last year’s XPO Game Festival), so it was incredible to spend time with more of the Novy team. I really enjoyed having the opportunity to meet with multiple developers in the game industry from around the world. Meeting some of our clients like Andreas Firngil from Nosebleed Interactive was a great experience as I could tell he put so much passion and hard work into making Vostok Inc. when he was showing the game. I also loved seeing all the Veewo Games’ Super Phantom Cat swag around GDC.My time at GDC was short, as I was there for just two days, but I know for sure that I’ll be sure to come back to GDC and stay even longer.

Blane (Account Manager)
GDC 2017 was a bit different GDC for us this year. In past years we are normally working a booth on the show floor, but this year, the team was not tied to a booth. The beauty of us being at GDC is meeting and seeing the sheer amount of clients (or potential clients) we have in the expo hall and this year was no exception. Veewo Games was showing off Super Phantom Cat 2 in GDC Play, 4A Games was demoing ARKTIKA.1 with Oculus, and BadLand Games was set up with Nosebleed Interactive at the Microsoft Xbox booth to show Vostok Inc. I was tasked with helping BadLand round up some press for Vostok Inc which turned out to be pretty fun. We were able to get an interview with IndieGames.com and even someone from Wearable.com came by to check out the game. It’s always great to see the Novy team since GDC has become our unofficial annual meet up. I always love meeting my co-workers for the first time, which is a tradition that has happened at every GDC since I started at Novy. This year I was able to meet Alvin and Vanessa in-person for the first time, which turned out to be a blast. Together, the Novy team was able to accomplish some great things on the show floor. It’s always exciting to chat with developers about their games and seeing their excitement about the services we provide and all the different ways we can help them. I’m already looking forward to GDC 2018 and I’m curious to see who I will get to meet next year!

Vanessa (Community Management Coordinator)
In my eight+ years of working in video games, this was my first GDC. After hearing so many great things about the show, being there first hand to experience just how different it is from any other event that I’ve been to, I can definitely say it has become one of my favorite conventions. Most of my experience is in public conventions, where fans file in by the thousands. While GDC was packed full of amazing developers and industry professional it really felt like a show that provided value to everyone there. Being able to chat with developers, get a look into the workings of their games and the development team itself really help put into perspective just how motivated everyone in the industry is. From small indie titles to big production games, everyone there was equally excited and proud of the work they have done. It really lit a fire in my heart to love and appreciate the industry that I work in and the developers and publishers I work with. Often times we all get consumed by the work, but GDC just proved that this industry revolves around fun and enjoyment and I feel incredibly lucky to be able to share the space with others who are just as passionate about it. Overall I would give GDC a 10/10, would attend again! Overall I would give GDC a 10/10 and would attend again!

Marcos (Playthrough Coordinator)
Where to begin with this year’s GDC? To start off, this year was my second GDC and the first time I really was able to walk around a talk to developers about their games and where they are looking to go with them. Last year, I spent most of my time with Blane at the Yo-Kai Watch: Wibble Wobble booth, so being able to freely explore the show floor felt great! Talking to new developers was amazing, but I have to say being able to meet a few of the developers of games that I actually worked on, like Brett Taylor from My dog Zorro and Barry Bloom from OnOff Gaming, was the best part of my GDC experience. Sitting down with them and discussing how far their games have come and what their next move was going to be was amazing and made me so happy that I get to be in this industry.