After having a blast at the WINTER PLAY: San Francisco Game Expo, I was excited to go to SPRING PLAY! I have to say, the folks at Playcrafting really stepped up their game with this event as it was bigger and better in every way, which I didn’t think would be possible. There was an even wider variety of indie games to play, tons of great indie devs to meet, and of course, even more delicious food and drinks to enjoy (including one of my favorites – pizza!). Though it was in a new, larger location, it was still packed. 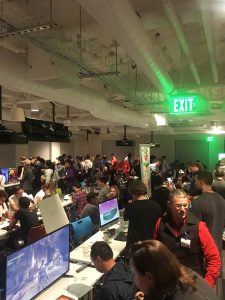 Just like last time, I had only an hour and a half to experience all I could at the event. There were plenty of great indie games to play (over 60!), so due to timing, I could only play a select few. Here are my thoughts on three that I was able to spend ample time with. 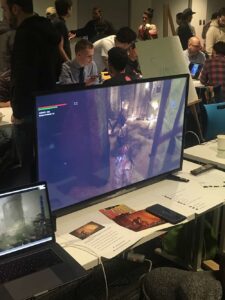 Dungeonhaven by Cold War Game Studios
While I was checking out the indie games on offer at the show, this one caught my eye right away. It looked like a love letter to Dark Souls, one of my favorite games of all time. I’m happy to say that the game not only resembles Dark Souls, but plays like it, too!

Salad Hunt by Salad Hunters Inc.
After noticing Salad Hunt’s adorable promotional banner, I decided to give the mobile game a go. I was happy I did, as it was a nice and simple arcade shooter that ended up being perfect for kids and families. Telly Lee, co-founder and designer at Salad Hunters Inc., mentioned how he wanted to create a game featured shooting gameplay but would also be appropriate for kids, which is exactly what he accomplished with Salad Hunt! 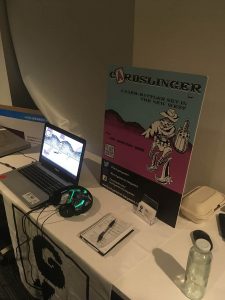 CardSlinger by Lost Generation Games
This card battler shooter sure is something else! Playing as a card-shooting cowboy was a lot of fun, with a unique idea I’d never even dreamt of. Its Western setting and old school, pixelated art style was nice to see as well. I was thrilled to learn more about CardSlinger when I had a nice chat with its solo developer, Mark Wilson. He shared that he’s planning to release the game on itch.io, as he believes it’s a platform that deserves more love.

In my opinion, San Francisco is a city that caters to and shows love for the abundance of new ideas that spring forth from its citizens – especially indie games! SPRING PLAY is but one example of that, and I’m glad I was able to be a part of as a member of the gaming scene in the Bay Area. Until next year! 🙂