LEVEL-5 Inc. and NHN PlayArt announced the release of YO-KAI WATCH Wibble Wobble in Latin America. The mobile puzzle game is part of the popular YO-KAI WATCH franchise, and it challenges players to defeat enemy Yo-kai by making matches with Wib Wob symbols.

In each battle of YO-KAI WATCH Wibble Wobble, players must swipe to connect one Wib Wob symbol to another of the same kind, which forms an even larger Wib Wob. As players form large Wib Wob, they can tap them to damage the enemy Yo-kai — the larger the Wib Wob, the more damage it deals. In addition, the more Wib Wob players connect, the faster the game’s Fever Gauge will fill. When it’s full, a special Fever Mode is triggered, causing players to become temporarily invincible.

As players complete battles, they can recruit new characters to their team, making harder battles easier to tackle later on. 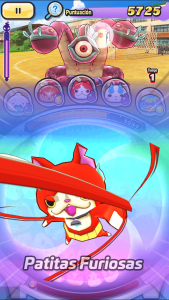 YO-KAI WATCH Wibble Wobble has been downloaded more than 10 million times since its Japanese release in 2015. Now, the game has been fully localized into Spanish and Portuguese, and can be downloaded for free on iOS and Android in most of Latin America.

With the help of Novy Unlimited, YO-KAI WATCH Wibble Wobble has been covered by numerous outlets, including Gamezebo, Polygon, and Pocket Gamer, among others.