Novy Unlimited’s own Brad Crespo, PR Coordinator and guru of indies, made his way to Winter Play, a San Francisco-based indie expo with all the newest up-and-comers in the independent space. Brad’s love of games (and pizza) meant he was in for a sure-fire night of new experiences from San Francisco’s game development scene. Here’s what he had to say:

WINTER PLAY: San Francisco Game Expo was a fantastic event that truly showcased Bay Area indie development talent from both video game developers and board games developers! When I arrived, one of the first things I noticed was just how well the event was organized by the folks at Playcrafting. There were multiple computers to sign-in via a Google Doc form (fitting since the event was at The Google Launchpad), plenty of space for developers to showcase their game, and tons of pizza for guests to enjoy. Initially, I was unsure what to expect, but I was happy to find that it was a nice and cozy atmosphere to chat about games and of course, play them too! 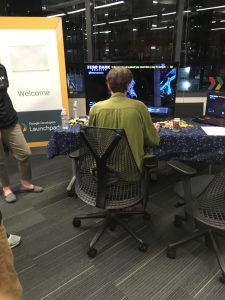 With more than 50 games at the event and only an hour and 30 minutes to explore, I unfortunately wasn’t able to try them all, but I did try quite a bit. All of the games at the event looked great though! There definitely was a diverse range of games present — from already launched titles to pre-alpha development ones!

I played plenty of indie video games, but here’s a quick rundown on the initial four! The first game that caught my eye was Noisz, a rhythm and shoot-em-up hybrid game, as I saw a player dancing and head bobbing while he was playing. I had a chance to give the game a try and was able to score an “A” rank for one of the songs. Next up was Feeble Force, which is a metroidvania game set in bleak and dystopian world. When speaking with the developer, Fletcher Cole, he mentioned his love for game speedrunning and intentionally put in game-breaking mechanics in Feeble Force, which I thought was neat! One game had quite a line, which I found out was for a metroidvania-roguelike hybrid called, Black Future ’88. The game reminds me of Guardians of the Galaxy 2 as the art style of the game is full of neon lights! Lastly, I took a trip in outer space and happily crashed into asteroids in the space survival game, Zero Dark Thirty. 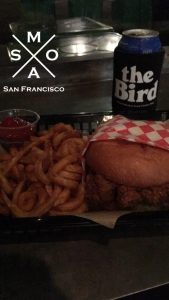 There was so much to play at the event and I was excited to hear that Playcrafing will be having another San Francisco Game Expo in the Spring! After my experience at this event, I’ll definitely be coming to the next one. 🙂

After a fun time playing games and meeting awesome developers, I decided to end the night by grabbing the Happier Meal at The Bird, which has the BEST fried chicken sandwich of all time. Yes, it’s even better than Chick Fil-A’s!