MomoCon is a great convention located in Atlanta that has been growing by leaps and bounds over the last few years. It’s one of Georgia’s few geek-friendly conventions and is the largest video game convention in the Southeast. Last year I spent my time exploring MomoCon and talking on a panel with the IGDA Atlanta executive board where we highlighted some of the studios and games that were being made in Atlanta. MomoCon 2016 proved to be a bit different. Instead of wondering around and exploring the convention, IGDA Atlanta decided to take a more hands-on approach in an initiative that would help all developers on MomoCons expo hall floor.

If you’re a developer, every convention can be viewed as an opportunity to share your creation with the world. Likewise, journalists use conventions as opportunities to discover new games to share with their audience. Recognizing that there was an opportunity to showcase, not only Georgia’s game development scene, but all the indies that were at the convention, IGDA Atlanta got to work and began planning a press event at MomoCon. 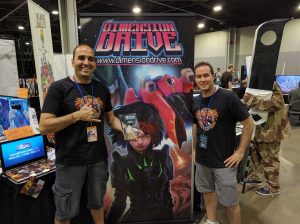 Since IGDA Atlanta’s executive board is comprised of three PR professionals (Novy’s Erich Schuler, Hi Rez Studios’ Gabriel Mugheli, and myself), organizing the event was second nature. MomoCon’s co-founder, Chris Stucky, was excited about the idea and gave us access to any resources we would need. Stucky even agreed to close off the gaming area for an hour for our press event, which made our jobs much easier!

Once Stucky agreed to our idea, our chapter chair, Molly Proffitt, and another board member, Gaylen Malone, reached out to the developers that would be on the showfloor and gathered each of their press kits. While the press kits were being collected, I began massaging journalists that were attending the convention and began booking appointments.

The response from both developers and journalists was overwhelmingly positive. Press were happy to have a chance to check out the games and talk with developers without getting in the way of convention attendees, and the studios were thrilled to have a chance to interact with some high-profile press. Giving out flash drives that contained each studio’s press kit meant that the media would have all the resources they would need to write articles. It was a win-win for everyone involved. 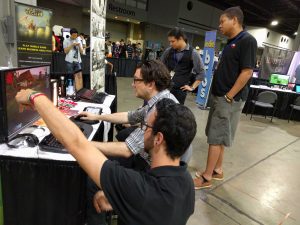 Once the convention got started, we were able to meet with the developers in the expo hall. Everyone was excited for the press event and some even gave us hugs for all of the work we put into making sure their games got noticed by the press.

Of course, this wouldn’t mean anything if we weren’t able to get results for our efforts. Luckily, many of the games on the MomoCon show floor were featured on outlets like Destructoid.

While everyone at MomoCon enjoying their time at a convention, I was having a blast working and helping developers get noticed. Sure, I may have decided to spend my weekend working, but it was fun work and it was worth it. Considering how successful the event was this year, IGDA Atlanta might do something similar again next year. So if you find yourself in the Atlanta area for MomoCon, be sure to shoot me an email!