The Novy crew felt game overload recently as they attended not one, but two major gaming conventions in San Francisco, California. Working to the last second, everyone had a chance to find a new game they loved, and feature the title they were there for, Snail Games’ ARK Park. Through all the chatter with developers, the team got a chance to look back on the industry, as well as see what amazing titles await its future! 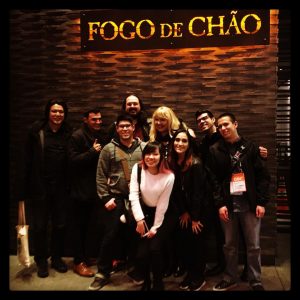 “GDC this year was as interesting as ever. To kick things off, it was the first year I didn’t make the drive up from Orange County to San Francisco! Instead, I rode the train. Perhaps the only downside to taking the train is the time it takes. Since it’s such a long trip, there aren’t very many options when it comes to timing. Both my trip to and from started very early in the morning at roughly 0400-0600 PST and didn’t end until mid to late evening at 1600-2200 PST. Luckily, I could make use of this travel time by working offline or catching up on sleep (zZz).

In San Francisco, it started to feel more comfortable. I started to easily recognize places and where to go this year. I even found the place I stayed at for my first GDC several years ago.

Since we were participating in GDC along with GCA, I got a chance to check out the AT&T Park. This also showcased many awesome developers from around the world. My particular favourite was a unique take on how a dice, TCG, and board game could be merged together into one game. 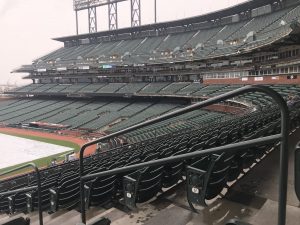 Speaking of board games: Marcos, Rico, and I even got to try out a board game that was in development together! This was a quick but exciting game that had us all neck and neck to be the winner with the most Cause. 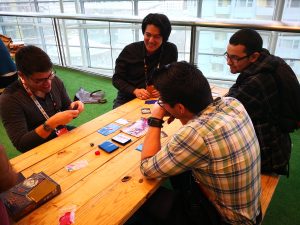 Our main event featured hosting the launch of ARK Park and PixArk. It was hosted at Jillian’s right next to the Moscone. I hope that all the developers that wanted to were able to get a chance to try the games but also a little baggy with a cute dinosaur plush.

I am quite excited for our next adventure together.” 🙂

“2018 marks my second year of GDC, and it was just as exciting as the last. With a week full of video games, surrounded by people passionate about the same thing, the vibes are hard to pass up.

Unlike other conventions, GDC passes on the lights and glam and really offers a close, raw look at game development. And, if you’ve been in the industry long enough you come to enjoy being able to talk face to face with others, being able to see and feel their excitement for their game. I had that opportunity as we made our way through the maze of booths set up across two massive floors. On top of that, I was able to work at the ARK Park booth in the Steam room which was a wonder in itself. The mood lighting, combined with upbeat music made the area a fun place to hang out.

Being able to demo the game on release day was also super exciting. Seeing people react and know they can go home and play it themselves was cool to see. On top of a crazy week was a fun event hosted by Novy Unlimited where some of the best of the best in the industry gathered to learn more about ARK Park. A good presentation in a welcoming venue filled with industry friends was a highlight of my trip. The best part of any convention though is being able to connect with friends and coworkers. I got to meet some new people on the team, met a friend in San Francisco I had been internet friends with for 5 years for the first time, tried a ton of good food, and reconnected with people I hadn’t talked to in a while.

All in all, it was an amazing week of food, fun, and video games. What more could anyone ask for?”

“Oh, what to talk about first when it comes to these two events? Let us begin with Game Connection America (GCA) and then we’ll discuss the events of the Game Developers Conference (GDC). Both were fun and very interesting to say the least. 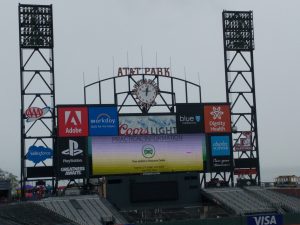 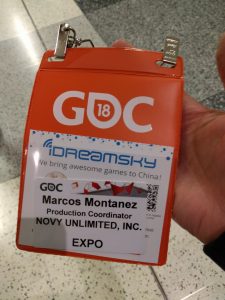 I went to GCA on Tuesday, March 20th. I arrived on Monday, the 19th, but was in meetings for most of the time that day. I have to say, I really liked GCA and its location at AT&T Park. It was very quiet, and I had no problem sitting down and having a full conversation with developers, artists, and producers. There were many really fun games I got to see and a few I was lucky enough to test out. 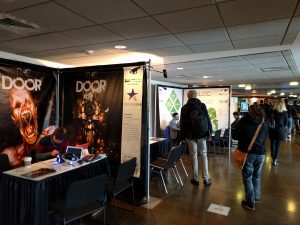 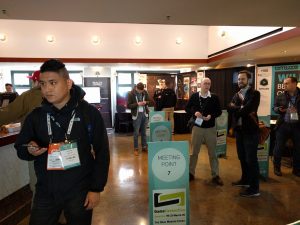 I got to spend the rest of the week, Wednesday through Friday, at GDC! Now this felt like home 🙂 Going from booth to booth, I gave my elevator pitches to developers about what Novy Unlimited could do for them and their game. This was the indie year of the six-to-eight-months production games, and I was completely blown away on how far and detailed each and every game was. VR was abundant throughout the whole conference, which made me smile. I really think it is the new way players are going to experience the next big games. 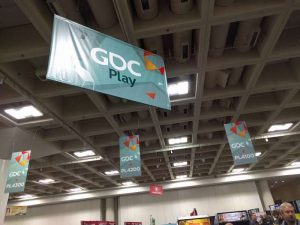 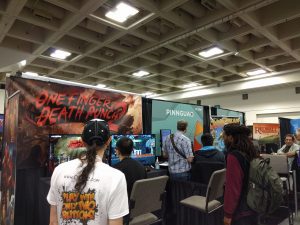 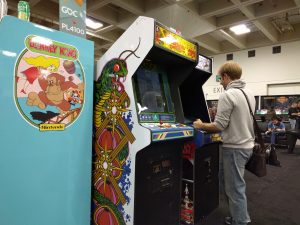 By the end, I was exhausted but didn’t want to stop for a second! So many games to see and play. I spent every last second I had on Friday running from one booth to another only to finally be stopped by the fact that I needed to drive back to LA before the roads got any worse than they already were. I can’t wait to go back next year, hopefully representing a new client at their booth – which in my opinion is the best part of GDC.” 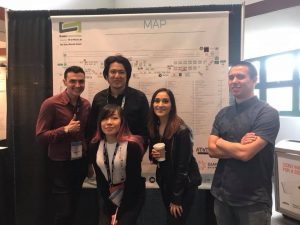 “I was fortunate enough to attend my first Game Developers Conference this year! The experience was amazing, overwhelming, and exhausting. I enjoyed seeing so many people who are passionate about games in one place. I was able to meet indie game developers, journalists, and other professionals who are in the industry. In addition, I had the opportunity to check out exciting new indie games from every genre you could think of – racing, strategy, twin-stick shooters, etc. It’s also cool to see how each game differs from each other in terms of aesthetics. I loved seeing a developer’s eyes light up whenever I asked them questions about their project – listening to their stories, asking how they got inspired and what their game is all about. Their passion was infectious! All in all, I would go to the Game Developers Conference again in a heartbeat.”

“Last year, I went to my first GDC, which was actually my first time being in California. This year, however, I’ve lived in San Jose, CA for almost four months and have explored San Francisco almost every other weekend! It was great to not only go to my second GDC, but to also explore San Francisco with the Novy team. 🙂 Sadly, I had a terrible cold…that didn’t stop me from having a good time, though! 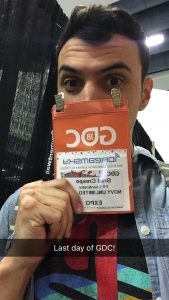 The first two days in San Francisco, I spent my time at the Game Connection America (GCA) 2018 convention, which was at AT&T Park. As a huge baseball fan (Go Orioles!), it was fun checking out the park and looking at all of the San Francisco Giants World Series memorabilia. GCA had a nice, mellow vibe to it as it was mainly a space for video game companies of all sorts to have business meetings. There were so many people from all over the world who were all passionate about the video game industry.

It was great meeting some of the ICEX staff and supporting them at GCA. At the convention, there were areas that represented specific countries. For example: Games from Spanish developers were in the “Games from Spain” area. I had the chance to check out a new kid-friendly shooter there – Rascal Revolt from Seamantis Games! It was such a thrill to play and I had a fantastic time chatting with Seamantis Games’ CEO, Manuel Asorey, and his team. 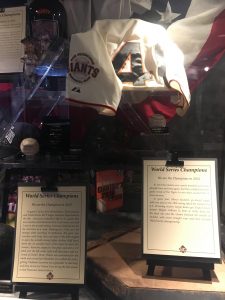 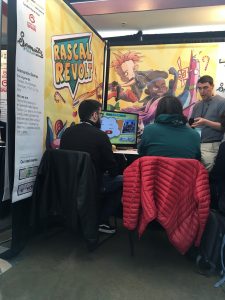 After GCA, I got to dive into GDC! One particular highlight at GDC was joining Vanessa in helping out with the Snail Games’ ARK Park booth in the Steam room. We had invited media members to play the game out and they were amazed with just how immersive it is. UpUpDownDown’s Austin Creed (who’s also a WWE superstar!) stopped by and had a blast! Outside of the GDC Expo, Novy Unlimited hosted an ARK Park launch event for industry professionals and friends to learn what ARK Park is all about. Over 80 guests attended the event! 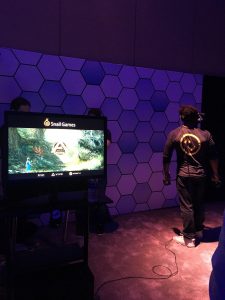 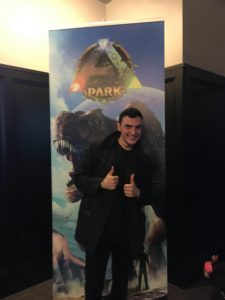 The last day of GDC was exploring the expo floor and it was filled with all sorts of games to check out. There was everything from alternative control scheme games at the “alt.ctrl.GDC” exhibit to fantastic indie games of GDC Play’s exhibit and even big budget titles! While I didn’t have a chance to play all of them, I had so much fun playing Juncture Media’s fast turn-based competitive game, AVARIAvs and getting the top score in a Tomb Raider light gun game with Marcos and his brother Rico.”

“We’ve all been there. You’ll be walking around at a game convention, blissfully soaking in the sights and smells while making a half-focused effort to stave off sensory overload. While leaving a game demo that you particularly enjoyed, you might think to yourself, “Wow, a lot of work must have gone into setting this booth up.” You might question just how difficult it was to plan the booth, set up the presentation, coordinate team members, and direct them around for four days of pure business that, to the common attendee, might seem like simple gaming fun. Then, you’ll be off on your merry way to the next latest and greatest thing in PC gaming.

Or, at least, I’ve been in that situation multiple times.

Working at GDC strictly on business not only let me step into that inverse world of meeting new clients and conducting conferences, but it also let me peer into the inner workings of a sprawling industry largely unseen by the casual attendee. And – foot aches aside – I thought it was darn fun. 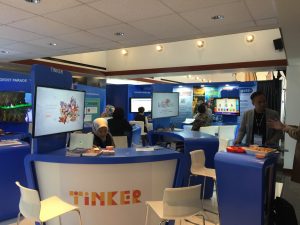 I had been struggling to escape a gaming rut before I left for GDC early Monday morning. Games were becoming less and less fun, and the direction of the industry itself seemed uncertain at best or discordant at worst. A quick walk through the GCA and GDC show floors on Tuesday and Wednesday were enough to rekindle my gaming fire, at least partially. 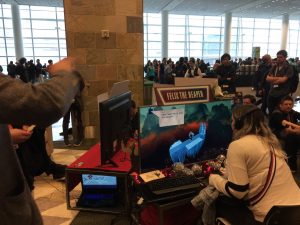 Sure, I was no stranger to playing cool new independently produced games, but this time I was meeting with their developers as someone who could help raise their digital baby to the public eye. It’s a joy talking with a developer about how their dancing grim reaper reminds you of an even more suave, more complex take on Manny Calavera; it’s an absolute delight explaining to the developer that their ‘boogie man’ could become a unique hit in the indie scene with the right marketing. 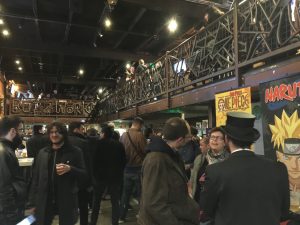 And I can’t thank my Novy teammates enough for making GDC a blast. Whether it’s talking about games, trudging through the rain, or discovering hidden dining gems, it’s the social connections that make video game conventions true wonders. After all, it’s easy to forget that there’s another human on the other end of the Internet, even if you work with them every day. Just don’t forget that there’s a life beyond games too.” 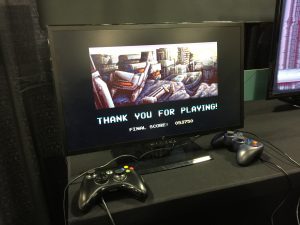