Every Labor Day weekend, Geeks, Nerds, Gamers, Cosplayers, and all around pop-culture enthusiasts from all over the United States make a pilgrimage to Atlanta, Georgia to the holy Mecca that is Dragon Con — the South’s largest geek entertainment convention and one of the few conventions I can think of that’s entirely fan-focused. Actually, calling Dragon Con a “Convention” just doesn’t seem right. It’s more like a week-long Halloween party in September. Dragon Con is one of those events that’s “ambiguous,” since it has no specific area of focus — and that’s part of its appeal. Everyone is welcome at the convention in a way that is unlike most others. Literally, everything is at Dragon Con. There’s a popular rule on the Internet that says if something exists, you can find it in a certain area [that is probably best left unsaid]. Well, this same rule also applies to Dragon Con; if it exists, you will find it . . . at Dragon Con. 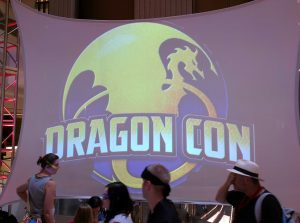 You want a ’90s-themed Middle Earth Dance Party with dwarven-themed Darth Vaders? You’ve got it. You want to see a Celtic band perform with an elvish choir? Prepare for some sweet melodies! Do you want to learn about filk? It’s an actual thing! Want to learn about the NSA and their spy techniques? Of course you do! Looking for a room filled with the most off-the-wall board games? Look no further! Searching for a Star Wars group to reenact the battle of Hoth? This is the con you’re looking for! Want to get the inside scoop on all your favorite celebrities and TV shows? Turn off TMZ and come to Atlanta! Or do you just want to party non-stop with a group of cosplayers from the time the con starts, until the last person leaves? You’d better have your beer hats ready, because this party train does not stop! This is just a very small taste of what happens at this convention — and each year, it grows some more and incorporates something new! 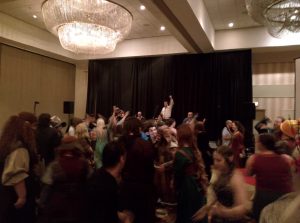 At this point, you might be thinking, “Wow, that sure is a lot, but how does all of that fit into one convention? Doesn’t the building get packed?” Well, you’re right, it does get very packed! But here’s where Dragon Con truly shines. Instead of being forced into one central conference center, Dragon Con is spread out across a couple of city blocks, in five hotels, and Atlanta’s AmericasMart. This allows them to do things that you would be hard-pressed to find at other conventions — like host official raves from midnight to 5am every day. Now, for someone like me, this creates a lot of opportunities to get into trou…..errr….go exploring. It’s no secret that I like to meet people and go on adventures during conventions. It’s also become pretty standard that any time I go to an event, weird (but awesome!) stuff always happens. Dragon Con 2015 was no exception and did not disappoint. 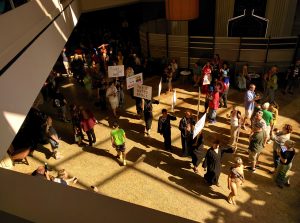 Group of Game of Thrones sparrows

One thing about the con is that even though it technically starts on Friday, it REALLY starts on Thursday (some even argue Wednesday). This quickly became obvious when I decided to have dinner at the small 24-hour diner across the street from one of the host hotels and ran into Robbie Amell singing karaoke with some fans! For those who don’t know, Robbie Amell plays Firestorm on The Flash and is also Stephen Amell’s (The Arrow) cousin. This set the perfect stage for what was bound to be an awesome weekend.

Friday came and we did the typical convention stuff. I got my picture taken with Stephen Amell, because why not? What I didn’t realize is that Stephen’ plane was running very late — so to kill time, John Barrowman got up and gave a full stand-up comedy show to the crowd. This was awesome and made the purchase of the picture totally worth it — no questions asked. Seriously, John Barrowman is awesome — and if you don’t know who he is, click here. 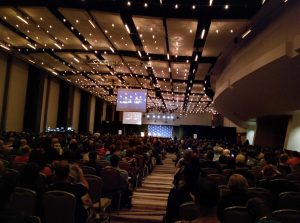 At around 7 pm, the con starts to change and go into full party mode. It’s only natural to partake in such festivities; after all, it’s the only time of year where you’ll find a rave light-saber wielding Jedi, right? This showcases another one of Dragon Con’s strengths: Even people who don’t do the party scene in “real life” do it at Dragon Con. Why? Because (nearly) everyone is treated like family, and almost everyone is in cosplay. It brings out the best in people and really helps bring everyone together. There’s something truly different about a traditional party and a Dragon Party. 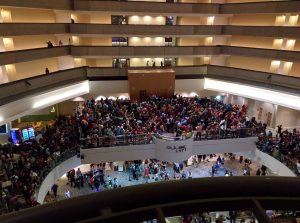 Friday night at the Marriott (one of five host hotels)

Saturday, oh Saturday. This is where things get crazy. Dragon Con shuts down an entire square mile of Atlanta’s roads for a gigantic parade. It’s a combination of everything you can expect to see at the con. It’s filled with amazing cosplay, custom cars, fully-functional robots, and much more. 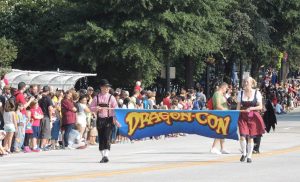 How every Dragon Con parade begins

Throughout the day, awesome things happen. One can go to the con, not go to any panels, and still have an amazing time. There is just a sheer amount of actual stuff to do; whether it’s playing games, finding some fellow cosplayers and parading around the con or making new friends, you’re never going to be bored here. Admittedly, it does get pretty difficult navigating around so many people, but there’s so much going on that it’s really hard to care too much. Also, you will never find an empty bar anywhere near the convention area. 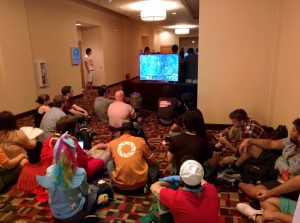 Group taking a break and watching a game of LoL

I know I’ve mentioned raves a few times, but I need to clarify something: There’s an official convention rave that the hotel lets the convention host until 5am — so naturally, I had to check it out! What made this night in particular even more awesome was running into Stephen Amell at the hotel! He was just out there having a good time with the rest of us, which is something I thought was pretty awesome. Unfortunately, I don’t have any pictures to prove this actually happened, so you’ll just have to take my word for it. 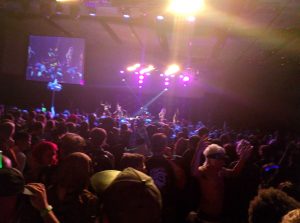 Since this is only time of year where all of Atlanta’s Geeks and Nerds come out in full-force, it’s also the best time to make new friends, or visit old ones that you probably haven’t seen since the last convention. Fellow Atlanta-based Novy team member Jackie Simmons and I thought it would be a good idea to meet up with an old college friend of ours on Sunday — since we hadn’t seen each other in a while. Sunday was a pretty nice and calm night…relatively speaking, of course. We walked around the con, ended up in some odd places, did some strange things — you know…the usual late-night convention stuff that only happens at Dragon Con. 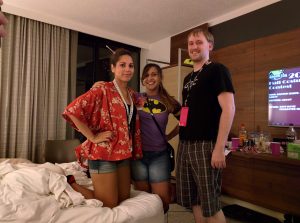 Blane (right) and Jackie Simmons (center) meet with a friend

Monday, the day that is already universally recognized as the worst day of the week, marked an end to the festivities. It always amazes me how quickly the hotels empty out — especially considering the amount of people that are out late the night before. 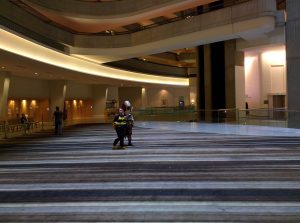 But alas, the spirit of the convention had one last surprise in-store for me: I decided to call an uber to get back home; I used one to get into town on Thursday, since I hate driving in downtown Atlanta traffic. Normally, this is a pretty standard experience. You call the Uber, the Uber shows up, you get in, and you leave. However, this time I was greeted by the Grim Reaper. Death himself had decided he was going to be my Uber driver — marking the absolute best way to end Dragon Con 2015. 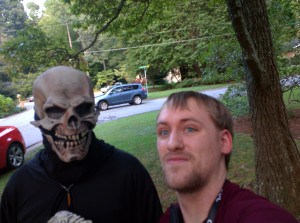 Chilling with the Grim Reaper

Dragon Con delivers an awesome experience every year. While I’m sad that Dragon Con 2015 has ended, I’m already super excited for Dragon Con 2016. If anyone happens to be in the Atlanta area next Labor Day weekend, I highly recommend checking out this convention — but be sure to find me and say “hello! 🙂