Blasters of the Universe: Taking Over E3

There’s a new VR God in town: Grand Master Alwyn, Virtual Space Lord – and it turns out that he has unceremoniously hacked the official Twitter account of the highly-anticipated VR bullet hell shooter from Emmy® award-winning content studio, Secret Location … Blasters of the Universe!

Alwyn is out of control: If you send him a tweet during E3, you just might get a snarky #AlwynFTW response!

The Blasters of the Universe team is committed to regaining control of the Twitter account, and is doing everything to resolve this issue as quickly as possible. The team apologizes for any confusion this has caused.

Back in the ‘90s, plain old Alwyn spent his days as the undisputed king of the local arcade. Yes, he was awkward, insecure, and a little older than the other kids – but he also had superior skills, and could mash buttons faster than anyone else. Shunned by the other kids, Alwyn’s true friends were the arcade games he played day in and day out. The real world around him eventually disappeared as he became one with the digital worlds he inhabited for hours on end. Anointing himself with the Grand Master moniker, Alwyn became known as the one and only Virtual Space Lord.

E3 2017: Where to Find Blasters of the Universe

Face off against Grand Master Alwyn in the West Hall at the E3 Immersive Tech Zone (Booth #5400C). Alwyn has created his very own version of the floor map: 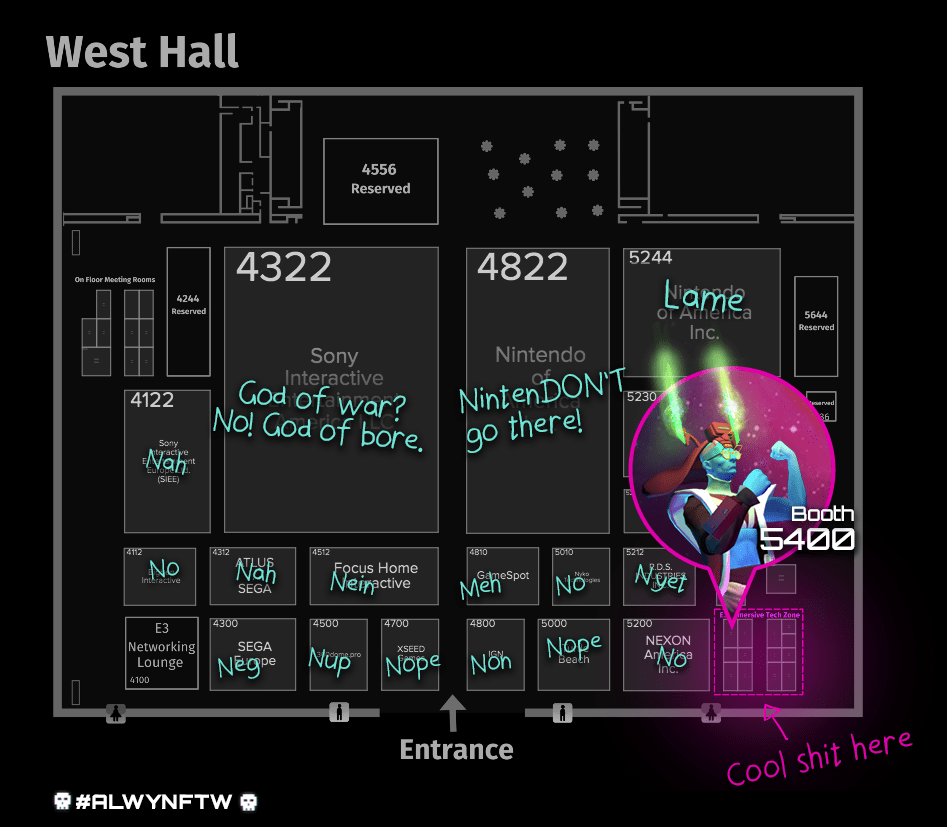 In Blasters of the Universe, use hundreds of weapon combinations and seriously sick moves to overthrow the armies of an insecure man-child. Dodge and blast your way through unrelenting waves of enemies in a neon-bathed world straight out of ‘90s VHS cover art! The game has recently been updated with a whole new level (Facility), a new boss battle, and even the long-awaited Endless Mode. Who knows what goodies lay ahead once Blasters of the Universe has its official launch?

Available on Oculus Rift and HTC Vive, Blasters of the Universe has been featured in a number of outlets – including Dual Shockers, Game Revolution, Sprites and Dice, The Life Cast, Asylum Gaming & eSports, and Invision Community.

Read more about Blasters of the Universe and Secret Location here.